Album with Original Illustrations, many featuring pioneers versus Indians, from the 1860s mostly 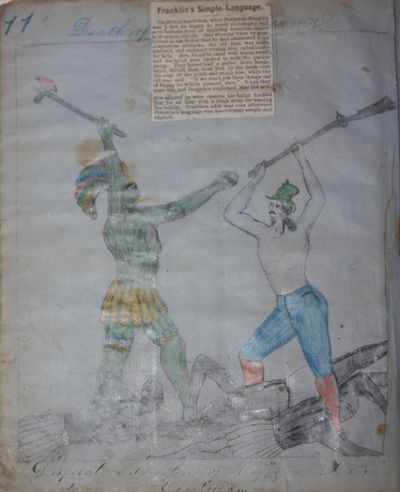 Quarter Morocco. Paper pastedown on boards.
by Ezekiah (?)
Quarter Morocco. Paper pastedown on boards. . Good. 8vo. 24 by 19 cm. With 29 full page drawings, all done with pencil, and often color pencils or crayons. In our view, ten read as fully colored drawings, and another twelve have partial coloring (just a detail, or just one color used, or dominated by black pencil), and the remaining seven are entirely done with black pencil. There is a handwritten, in thick blue pencil or crayon, numbering of the leaves, going from 1 up to 39, but skipping some numbers, which we assume are leaves that were excised. In total, about 60 pages of content (we hesitate to furnish an exact number as meaningful content is borderline on a few pages). The album appears to have had at least three lives. It was created, or intended, as an account book by a Boston shipping firm in the 1850s. This we know from the pages with blank entries meant to document the movement of goods from a warehouse to a wharf, with 185- and Boston printed above the space meant for a descriptive entry to be entered. Perhaps the book was used as such, with the pages with entries removed. The album was then used in three ways -- as a handwriting and/or calligraphy practice notebook, as a sketchbook, and as a notebook for creative writing. We think it is quite possible that the same person used the book for all three purposes, but we are not of the view that the same person did all the artistic, penmanship and literary work, as the handwriting is not of a single piece. But we are of the opinion that all the artwork is by one hand, and since the captions are written in a neat cursive consistent with some of the calligraphic practice, we tend to think that these pieces of writing were by the same person. However, there are some stories written out in a sloppier hand, and so at some point the album was passed on or shared with someone else. Finally, in its final incarnation, the album became something of a scrapbook, with newspaper articles and pictures pasted onto the pages throughout, often obscuring in all or in part the artwork and writing. (We have endeavored to remove these newspaper clips that conceal artwork, but plenty of clips remain.) The artist could have begun the scrapbook pasting, but we find it implausible that he would have covered up so much of his own creative work, even if he later came to find it of little merit. (Inventory #: 006486)
$7,500.00 add to cart Available from
White Fox Rare Books & Antiques
Share this item
White Fox Rare Books and Antiques
Offered by