Of the Architecture of Luis Barragán 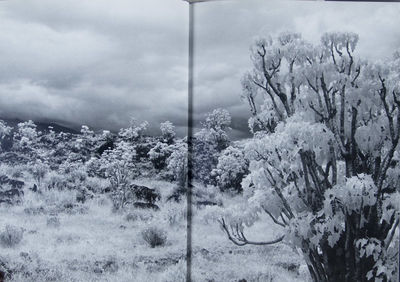 by Brooks II, Ernest H. et al; Armando Salas Portugal (photogr.)
New York: Rizzoli, 1992. First edition. Hardcover. vg to near fine. Folio. 167pp. Original blind-stamped purple cloth with white lettering on spine, in original illustrated dustjacket. Black endpapers. This monograph documents all of Barragán's important commissions, most of which are located in and around Mexico City, including El Pedregal, a landscaping and residential development built on 865 acres of lava desert which Barragán bought in 1944; the Towers of Satellite City (with Mathias Goeritz); San Cristobal stable, pools, and houses; the Gilardi house; the Barragán house; and the residential subdivision Las Arboledas. Among other awards, Barragán won the coveted Pritzker Prize for Architecture in 1979." (Publisher). Contributions by Ernest H. Brooks II, Ignacio Diaz Morales, Ricardo Legorreta, Armando Salas Portugal, and Massimo Vignelli. Armando Salas Portugal is the renowned Mexican photographer who was Barragán's official photographer for most of his career. Profusely illustrated with striking, mostly color photographs by Salas Portugal. DJ with very light wear along edges. Else in near fine condition. (Inventory #: 45827)
$120.00 add to cart or Buy Direct from
Eric Chaim Kline Bookseller
Share this item

Variola. (Smallpox) A Series of Twenty-One Heliotype Plates Illustrating the Progressive Stages of the Eruption of Smallpox over a period fourteen days

Boston : Samuel A. Powers , 1882
(click for more details about Variola. (Smallpox) A Series of Twenty-One Heliotype Plates Illustrating the Progressive Stages of the Eruption of Smallpox over a period fourteen days)

by Harrison, John (script by); Frank Herbert (novels by)

Touchstone Television Productions , 2002
(click for more details about Shooting Script for "Frank Herbert's Children of Dune)
View all from this seller>