[Original Typescript Draft for His Novel, Seams, with Pencil Corrections, Together with Extensive Email Correspondence with His Proofreader] 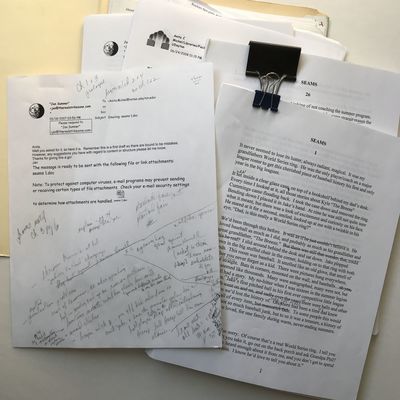 by [Baseball]. Sumner, Jan
[Denver, 2008. Near fine.. 166pp. typescript, plus more than 100pp. printed email correspondence. Typescript with pencil corrections, presumably by the author. Original draft of the 2011 baseball novels, Seams, with pencil annotations and corrections by the author. Jan Sumner is the author of numerous books on baseball, and was active for six seasons with the Colorado Rockies franchise. Seams centers on a family in a small town in Missouri during the middle years of the 20th century. An authorial statement on the Amazon page for the book says, "I undertook a story line based on old time baseball, starting in 1915, which transitions into the modern era centered around one family's love of the game, set in the small rural town of Washington, Missouri. It's the account of one man's improbable journey from local pitching guru to the game's biggest stage - the World Series. Along the way he must deal with the Great Depression, WWII, personal setback, murder and death." The email correspondence here, which spans two years, is between Sumner and his proofreader and friend/fan, Anita Michel, a librarian at the University of Dayton. Seams was published in 2011. (Inventory #: 721)
$150.00 add to cart Available from
McBride Rare Books
Share this item