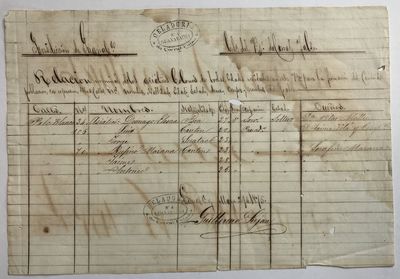 by [Cuba]. [Slavery]
[Guanabacoa, 1875. Good.. Manuscript broadside, 8.25 x 12 inches. Previously folded; light wear along old folds, two short separations at lower edge. A few small wormholes, minimally affecting text. Contemporary ink stamps. Light tanning and dampstaining. A brief, but detailed list of Chinese slaves in an area east of Havana, Cuba, composed during 1875. The list comprises six slaves on one street in the township of Guanabacoa, across the harbor from Havana, and was created for submission to a census of the island's population. It provides their names, origins, ages, status and their "dueños," i.e. owners, a somewhat uncommon designation, as opposed to "patron." References to the Chinese men on this list, are still somewhat euphemistic, who are called "Asiaticos colonos" -- Asian settlers. Signed, dated, and stamped by the local magistrate; a nice document of the bureaucracy surrounding slavery in Cuba. (Inventory #: 734)
$500.00 add to cart Available from
McBride Rare Books
Share this item