The Works of Algernon Sydney, A New Edition 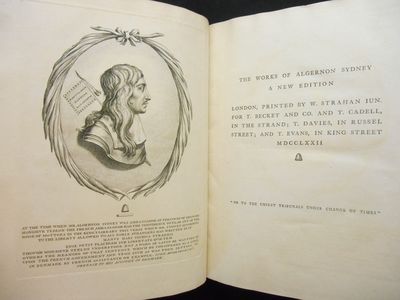 by Sydney [Sidney], Algernon
London: Printed by W. Strahan Jun. for T. Becket and Co., et al., 1772. Leather bound. Near fine. Quarto size, 817 pp. Algernon Sydney (sometimes spelled "Sidney") (1623-1683) was an English politician and political theorist; he opposed absolute monarchies and the divine right of kings, writing on the subject in his crucial work "Discourses Concerning Government" that "[g]eneral consent. . .is the ground of all just governments." Sydney was tried and executed for treason against King Charles II, with the beliefs he articulated in "Discourses" used as evidence against him in court. Sydney's writings, along with the philosopher John Locke's, were among the most influential on political thought during the seventeenth century, and in particular on the writings of Thomas Jefferson and the American Revolution. This edition contains not only Sydney's famous "Discourses Concerning Government" but also numerous letters he wrote, an account of his trial, and "The Apology of A. Sydney, in the Day of His Death", the speech he gave while on the scaffold just before he was executed. ___DESCRIPTION: Full brown contemporary calf, the spine with six raised bands and gilt decorations, red leather spine label with gilt lettering, gilt rules along the edges of the boards, frontispiece an engraved portrait of Algernon Sydney; quarto size (11.75" by 9.5"), pagination: [i-viii] [1-2] 3-540 [541-542]; followed by "Letters of Algernon Sydney, Taken from Thurloe's State Papers", numbered [1], blank [2], [3], 4-22; followed by "Letters of Algernon Sydney, Taken from The Sydney Papers", numbered [1], blank [2-3], 4-56; followed by "Letters of A. Sydney to Henry Savile, Ambassador in France", [1-3] 4-57, blank [58]; followed by "The Trial of A. Sydney", [1-3], 4-65, blank [66]; followed by "The Apology of A. Sydney in the Day of His Death", [1-3] 4-32; followed by "A General View of Government in Europe", [1-3] 4-33. Tasteful prior owner bookplate on the front paste-down, belonging to Thomas Durrant Scottow, a baronet of the Durrant Baronetcy, of Scottow in the County of Norfolk; the title was created on 22 January 1784. ___CONDITION: Near fine, with a strong, square text block with the boards solidly attached, the interior is clean and bright, free of foxing (other than a stray spot or two) or marks of any kind, and other than the bookplate mentioned above, entirely free of prior owner markings; professional restoration to the joints, head of the spine, and corners (name of restorer available upon request), boards have overall light soiling, some toning to the endpapers, light off-setting from the bookplate onto the front free endpaper, toned mark across the top margin of page 257, rear hinge is just starting. Although the outer covers have some wear, the binding is strong, and the interior pages are bright and clean, a beautiful and elegant edition of Algernon Sydney's significant writings. ___POSTAGE: Please note that this is an extremely large and heavy book, and therefore additional postage may apply; please inquire for details. ___Swan's Fine Books is pleased to be a member of the ABAA, ILAB, and IOBA and we stand behind every book we sell. Please contact us with any questions you may have, we are here to help. (Inventory #: 19030301)
$1,320.00 add to cart or Buy Direct from
Swan's Fine Books
Share this item

Mastering the Art of French Cooking, Volumes One and Two

New York : Alfred A. Knopf , 1971
(click for more details about Mastering the Art of French Cooking, Volumes One and Two)
View all from this seller>