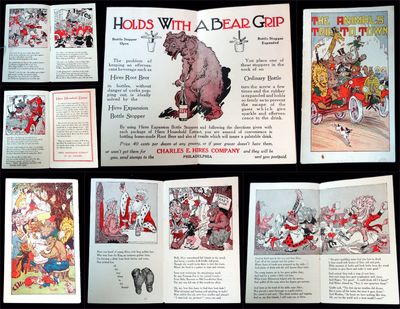 Philadelphia, PA: Charles E. Hires Company, c1915. This advertising booklet was produced by the Charles E. Hires Company to advertise Hires Root Beer. It is meant to be a continuation of a previous advertisement booklet called, "The Kings Nectar, A Legend", that told the story of Alice who won golden chair from a King when she made him a drink with Hires Root Beer. This story takes places shortly after when Alice invites all of her animal friends from the forest to come and share a drink with her. The resulting story is quite humorous as a variety of anthropomorphic characters, such as a bear, raccoon and lion, all pile into a bright red car and make their way to town and the party. The golden chair Alice won in the last story can even be seen on several of the drawings. The front cover depicts the animals riding in the car on the way to the party. The back cover depicts the same animals enjoying a picnic in the woods while drinking Hires Root Beer. The centerfold page of the booklet has an advertisement for Hires Expansion Bottle Stoppers which solves "the problem of keeping an effervescent beverage such as Hires Root Beer in bottles without danger of corks popping out." This advert as an illustration of a bear corking a bottle of root beer, as the stopper "holds with a bear grip." Below is a quote from the story when Alice describes the drink to her animal friends."The pure sparkling water that you love to drinkIs here mixed with berries of blue, red, and pink,While sweetest of barks and fresh herbs from the woodCombine to give flavor and make it taste good."12 pp (including wrappers), Staple booklet. Measures 5" x 3" (Inventory #: 29001122)
$100.00 add to cart or Buy Direct from Eclectibles
Share this item