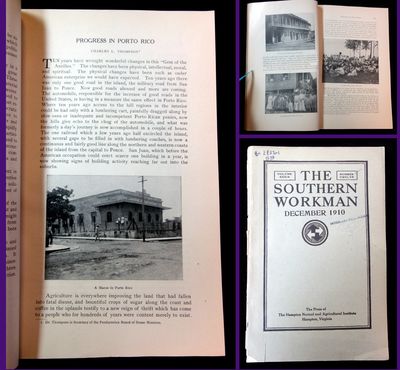 Hampton, VA: The Hampton Normal and Agricultural Institute, 10-Dec. The Southern Workman is a journal founded by Civil War General and Educator Samuel Chapman Armstrong, and is a magazine "devoted to the interest of the undeveloped races." Armstrong was the first Principal of Hampton Agricultural Normal and Agricultural Institute (later known as Hampton College, now known as Hampton University), which was founded after the Civil War to help provided education to freedmen. The school also focused on educating other minorities, such as Native Americans.. Some of the articles within this volume are "African Agriculture by Monroe N. Work, The Indian of To-day by Henry Roe Cloud, and The American Rural School by William A. Aery. Additionally there are ten images from photographs found within the three articles entitled Progress in Porto Rico, Restoration of Roman' Marriage Place, and the Awakening of Asia. 60 pgs. (pages are numbered 644-704). Tan printed wrappers. Measures 10" x 6 1/2" (Inventory #: 29001128)
$125.00 add to cart or Buy Direct from Eclectibles
Share this item