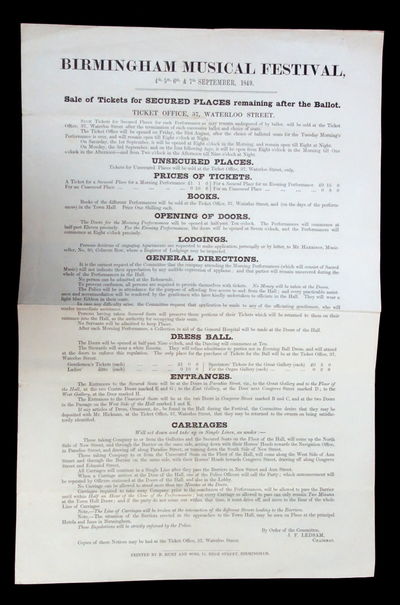 by Birmingham Musical Festival Committee
Birmingham, England: B. Hunt and Sons, September 1849. A broadside for the Birmingham Musical Festival, more often called the Birmingham Triennial Music Festival, which was the longest-running classical music festival. It was founded in 1787, it is several day musical festival, that ran in September every three years. The money raised by the festival originally went towards the construction of a General Hospital and after its completion, towards it's upkeep. The festival last took place in 1912.This broadside advertises the dates of the 1849 festival, September 4-7, the ticket prices, opening of doors, general directions, dress ball information, entrances, and carriage information. J. F. Ledsam, chairman. Measures 14" x 9" (Inventory #: 22001300)
$85.00 add to cart or Buy Direct from Eclectibles
Share this item