Movie Theatre for 'Fighting with Buffalo Bill', A Package of Fun and Entertainment for Children 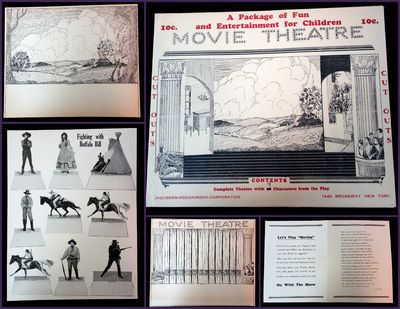 New York: Jacobsen Hodgkinson Corporation, c1926. Unfortunately this film is now considered to be 'lost film' (a film that is no longer known to exist in any studio archive, private collection, or public archive).. An uncut paper movie theatre with the characters from "Fighting with Buffalo Bill" a 1926 American Western film serial (totaling over four hours) staring Wallace MacDonald, Edmund Cobb and Elsa Benham. The paper theatre consists of the original carrying envelope, a movie theatre set with a curtain, a landscape background, one sheet of characters, and one single fold instruction page that includes a verse about men roaming the plains. On the character sheet there nine characters that one can cut out a and fold at the dotted line in order to make them stand on their own. Of these nine characters, four stand-alone men, one stand-alone woman, three men on horses (two of which are Native Americans) and one man standing behind a teepee. The scenes and curtains are in black and white. The characters are black and white images from photographs, presumably of the characters from the movie. The envelope the movie theatre comes in, incorrectly states that there are 10 characters to play with. This was presumably a printing mistake as the 10 has been crossed out and a 9 was written in. 4 black and white pages, all pages are uncut. Measures 12 3/4" x 10 1/2" (Inventory #: 29012114)
$300.00 add to cart or Buy Direct from Eclectibles
Share this item