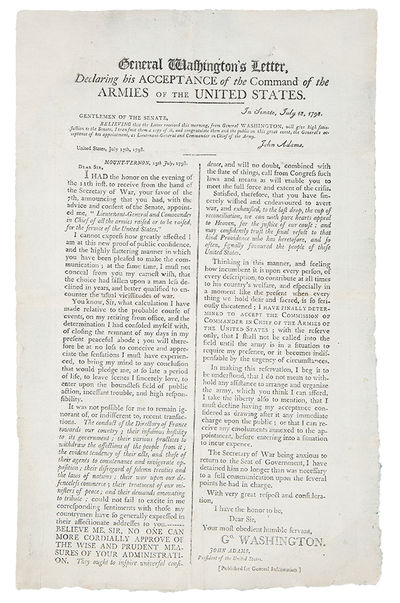 by WASHINGTON, George (1732-1799)
[Philadelphia]: Published for General Information, 1798. Letterpress broadside, approx. 18 x 11 inches. Expert restoration at upper corners not affecting text. Rare broadside printing of Washington's letter to President John Adams, accepting the role of Commander-in-Chief of the military during the Quasi War with France. In July 1798, hostilities with France appeared to be veering toward open warfare, and President John Adams turned to the best qualified man to assume leadership of the nation's military. Former President Washington had been enjoying his retirement in Mount Vernon for more than a year, when Adams sent Secretary of War James McHenry to convince Washington that his country needed him once again. This broadside records Washington's epistolary response to Adams, dated 13 July 1798. Washington expresses his "earnest wish that the choice had fallen upon a man less declined in years, and better qualified to encounter the usual vicissitudes of war" and his hesitation "at so late a period of life, to leave scenes I sincerely love, to enter upon the boundless field of public action, incessant trouble, and high responsibility." However, he also describes the "insidious hostility" of the French Directory, including "their disregard of solemn treaties and the laws of nations; their war upon our defenceless commerce; their treatment of our ministers of peace; and their demands amounting to tribute." Thus he accepts the commission as Commander in Chief, "with the reserve only, that I shall not be called into the field until the army is in a situation to require my presence." Washington remained Commander in Chief until his death a year and a half later. Though he was never required to lead his troops in battle, he played an active role in building the young nation's military capacity. This broadside is signed in type by Washington, and is preceded by the text of a 17 July letter from President Adams addressed to the U.S. Senate. Read to the Senate the following day, its subsequent publication as the present broadside must have been a great reassurance to a worried nation. Rare, with only three examples listed in ESTC. Evans 34829; Sabin 101713. (Inventory #: 36674)
$12,500.00 add to cart or Buy Direct from
Donald A. Heald Rare Books
Share this item
Donald A. Heald Rare Books
Offered by