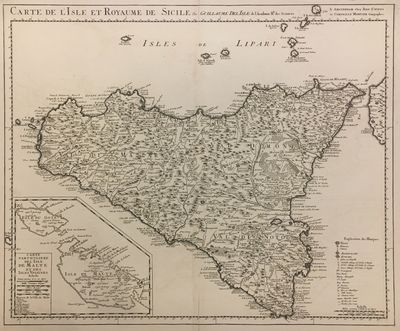 by COVENS, Jean; MORTIER, Cornielle (after Guillaume Delisle)
Amsterdam: Covens & Mortier, 1739. unbound. very good. Map. Uncolored engraving. Image measures 18.5" x 22.5", sheet measures 21" x 25.5". Shows some light damp-staining as well as repairs at verso of fold line. A small (1") tear at top left, image unaffected. An embossed library stamp can be seen at top left corner ("Lowell City Library 1844"). In very good condition. A detailed map of Sicily. Towns, fortresses, churches, ports, duchies, aqueducts, geographical features and ancient cities (ruins) are shown as pictographs with a corresponding legend. The island of Malta is shown in an inset at bottom right ("Carte Particulaire de l'Isle de Malte et des Isles Voisines Eschell"). The Amsterdam publishing firm of Covens and Mortier (1665-c. 1862) was established by Cornelius Mortier and Jean Covens. Together, the two republished the works of great 17th and early 18th century Dutch and French cartographers such as De L'Isle, Allard, Jansson, De Wit, and Ottens. The firm quickly grew into one of the largest and most prolific Dutch publishing outfits of the 18th century and enjoyed a long and prolific life under a variety of names. Guillaume Delisle (1675-1726) was a legendary French cartographer known for introducing a new standard of accuracy into 17th-century mapmaking. He was one of the cartographers who propelled the French school of map-making away from Dutch dominance. The French school emphasized science and accuracy over ornament. His family took over the business and kept publishing maps well into the late 18th century. He used astronomical observations to determine locations and draw more precise coastlines. He continually updated his maps and dispelled prevailing geographical inaccuracies throughout his life. (Inventory #: 289146)
$650.00 add to cart or Buy Direct from
Argosy Book Store
Share this item

Map of Valuable Building Lots in the Village of Astoria; and the town of Newtown, Queens Co. L. I.

New York : Perkins Sun Litho Establishment , 1851
(click for more details about Map of Valuable Building Lots in the Village of Astoria; and the town of Newtown, Queens Co. L. I.)
View all from this seller>