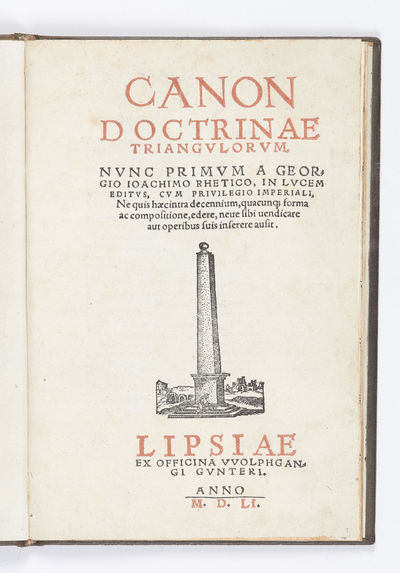 by RHETICUS , Georg Joachim
Woodcut vignette of an obelisk on title. Title & tables printed in red & black. [23] pp. 4to, attractive antique panelled calf (smallish stamp very carefully bleached from verso of title). Leipzig: W. Gunter, 1551. First edition of a great rarity; this epoch-making book contains "the first table to give all six trigonometric functions, including the first extensive table of tangents and the first printed table of secants."-D.S.B., XI, p. 397. These were the first great trigonometric tables ever issued; J.W.L. Glaisher described Rheticus as "by far the greatest computer of pure trigonometrical tables, whose work has never been superseded." This slender quarto does not consist entirely of these trigonometric tables; at the end is a six-page "Dialogus de Canone Doctrinae Triangulorum" by Rheticus. It is presented in the format of a humanist dialogue between Hospes, a guest, and Philomathes, who represents Rheticus's pupil Matthias Stojus, who also wrote the verse preface to this work. This discussion of the "Triquetrum" or trinal aspect in astronomy, and the invaluable use of these tables in mathematical and astronomical calculations, is particularly interesting as it includes an appreciation of Copernicus's mathematical work. We hardly need to point out Rheticus's friendship with Copernicus and his announcement of the forthcoming De Revolutionibus in his Narratio Prima in 1540. As a convinced follower of the new Copernican doctrine, Rheticus carried on the mathematical elaboration of Copernicus's system in the present book. Fine copy of a very rare book; WorldCat locates no copy in North America. Occasional slight cropping of outer margins of tables. ❧ Ernst Weil in E.P. Goldschmidt, Cat. 45, item 157-"One of the greatest rarities of the early literature of pure mathematics." Smith, History of Mathematics, II, pp. 610, 621, 622, & 627. Not in Smith, Rara Arithmetica. Tomash & Williams R80-"This work is also the first to use the semiquadrantal arrangement of tables (in which the table goes from 0 to 45 degrees, and the cofunctions can be found by reading the table backwards), which became the standard for this type of table publishing.". (Inventory #: 6750)
$55,000.00 add to cart or Buy Direct from
Jonathan A. Hill, Bookseller
Share this item
Jonathan A. Hill, Bookseller, Inc.
Offered by