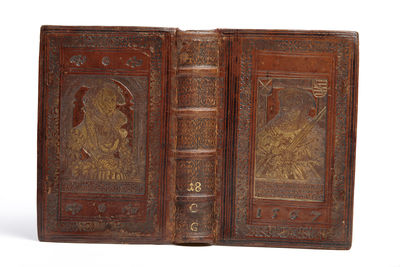 by SCHÖNBORN, Bartholmaeus
Several woodcut illus. in the text. Title & signatures DD-FF printed in red & black. Small thick 8vo, cont. calf over wooden boards (joints a bit rubbed), central panel gilt on upper cover with a portrait of Johann Friedrich I of Saxony, on the lower cover a portrait heightened in gold of his wife, Sibylle of Cleves, the date 1567 stamped on upper cover, blind decoration on spine and a gilt stamped shelfmark "18 C G," edges gilt, gauffered & colored, some leaves uncut, two pairs of ties gone. Wittenberg: J. Schwertel, 1567. First edition and a presentation copy in a fine contemporary gilt-decorated binding, with an eight-line presentation inscription by the author to Wilhelm IV, Landgrave of Hesse-Kassel (1532-92), in a humanist hand on the front flyleaf. Schönborn (1530-85), studied mathematics and astronomy under Erasmus Reinhold at the University of Wittenberg and remained there as a professor of mathematics, geography astronomy, physics, and Greek for most of his life. He also served as dean of the Faculty of Philosophy at the university. At the time of publication of this book, Wilhelm IV had just received Hesse-Kassel from his father. Wilhelm was renowned for his patronage of the arts and sciences, in particular astronomy. He was friendly with Tycho Brahe, constructed numerous astronomical instruments, and calculated many stellar positions. Upon Wilhelm's accession, it seems likely that Schönborn sent him our copy, adding to it the warm presentation inscription. The volume subsequently passed into the library of Wilhelm's grandson, Hermann IV (1607-58), who shared his scientific interests. BINDING: This is a very fine contemporary gilt binding, dated 1567 on the upper cover. The large panel stamp of Johann Friedrich I of Saxony (1503-54), adapted from a portrait by Lucas Cranach, on the upper cover (90 x 52mm.) is dated 1539 in its long caption. Konrad Haebler (I, p. 393, no. ix) associated the binding with a Wittenberg binder, Thomas Reuter. The panel on the lower cover (88 x 68mm.) depicts his wife, Sibylle von Jülich-Kleve-Berg (1512-54), Electress consort of Saxony. Its legend reads "Sibylla Geborne Herczogin Zv.G.V.B. Herczogin Zv Sachsen," without date. This stamp was unknown to Haebler. TEXT: "This is a classical treatise on the calendar based on astronomical calculations. It is also an example of the mounting concern of mid-sixteenth-century scholars with the chronological problem due to cumulative errors. It was this problem that ultimately led to Pope Gregory XIII's major calendar reform of 1582. It is handsomely printed...with the twenty-eight-leaf calendar at the end of the book printed in red and black."-Tomash & Williams S44. PROVENANCE: Wilhelm IV of Hesse-Kassel, with Schönborn's presentation inscription; "Hermannus HK," inscription on title-page, i.e., Hermann IV, Landgrave of Hesse-Rosenberg (1607-58), grandson of Wilhelm IV; Dukes of Arnsberg, Plettenberg'schen Bibliothek, Schloss Nordkirchen, with bookplate. In fine and fresh condition. There are a number of corrections in the text, which are clearly authorial. ❧ Zinner 2436. (Inventory #: 6751)
$22,500.00 add to cart or Buy Direct from
Jonathan A. Hill, Bookseller
Share this item
Jonathan A. Hill, Bookseller, Inc.
Offered by


(click for more details about [From upper wrapper]: Verlagsverzeichnis 1980)


(click for more details about [From upper wrapper]: Verlagsverzeichnis 1980)
View all from this seller>