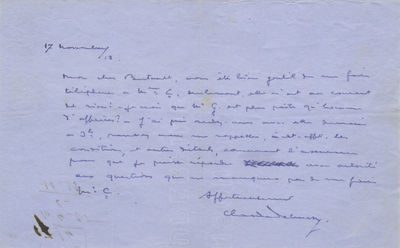 signed
by DEBUSSY, Claude 1862-1918
1 page (120 x 201 mm), trimmed from a larger sheet. Dated November 17, 1913. In blue ink on light blue paper. In French (with translation). Debussy writes a rather cryptic letter discussing a "Mrs. C" and a "Mr. G": "You were very kind to have me telephone Mrs. C, but she knows nothing about anything! I believe that Mr. G is more a poet than a business man." Slightly worn; creased at folds and slightly overall; very minor foxing; numerical annotation in ink to verso with some showthrough, not affecting text. "One of the most important musicians of his time, [Debussy's] harmonic innovations had a profound influence on generations of composers. He made a decisive move away from Wagnerism in his only complete opera Pelléas et Mélisande, and in his works for piano and for orchestra he created new genres and revealed a range of timbre and colour which indicated a highly original musical aesthetic." François Lesure and Roy Howat in Grove Music Online. Debussy wrote a number of letters to Bertault, most regarding his financial difficulties: "The many references to debts which occur in Debussy's letters from 1910 onwards ... reveal the terrible economic anxieties of his existence. In 1910, pressed by the impresario Henry Russell for repayment of a debt, he is far from being able to procure 5,000 francs. In the same year he asks a Monsieur Bertault for the loan of 6,000 francs ... In 1914 he is glad to accept 4,800 francs from Monsieur Bertault." Lockspeiser: Debussy, Vol. II, p. 105. It is possible that "Mr. G" refers to Robert Godet (1866-1950), a Swiss author and friend of Debussy. (Inventory #: 31359)
$1,650.00 add to cart or Buy Direct from
J. & J. Lubrano Music Antiquarians
Share this item