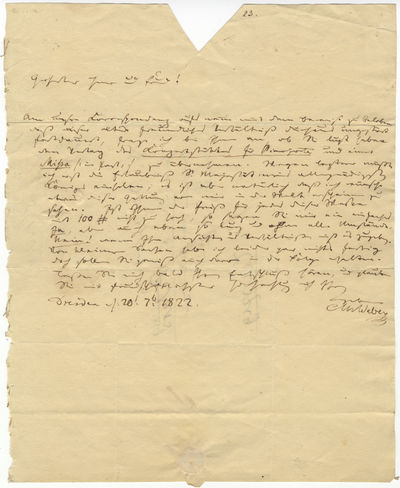 by WEBER, Carl Maria von 1786-1826
1 page. Quarto (198 x 246 mm). Dated Dresden, July 20, 1822 and postmarked September 22, 1822. In black ink. With integral address panel. In German (with translation). Weber writes to his publisher C.F. Peters to see if he is interested in the Konzertstück for piano and a Mass. "I am inquiring as to whether you would like to take on the contract for the concert piece for pianoforte and a Mass. For the latter I had to obtain permission of His Majesty our King, but it is natural that I would like to see something of this kind appear in the world..." Slightly worn and browned; creased at folds; loss of small triangular area to blank upper margin corresponding to original red wax seal; minor red ink stains to address panel. Weber settled in Dresden in 1817, serving as Kapellmeister and directing the German-language opera company there. His opera Der Freischütz premiered on June 18, 1821 to great acclaim and remains a landmark in German opera and Weber's best-known work. The success of the opera brought him increased attention, but his health was poor and so he primarily sent publishers older works that had not yet been printed. In this letter from July of 1822, however, Weber offers Peters two relatively new works, the Konzertstück and the Mass. The Konzertstück for piano and orchestra (op. 79) was completed on the morning of the first performance of Der Freischütz. "[It] is really his third piano concerto, and in its binding of four sections together to make a single-movement work, it joins contemporaries such as Spohr's Gesangsszene violin concerto in providing a model for the one-movement concerto of the later romantics and above all of Liszt." Warrack: Carl Maria von Weber, p. 237. The Mass to which Weber refers is most likely his Jubelmesse (op. 76), written for the wedding anniversary of Friedrich Augustus and Queen Amalie in 1819. In his role as court composer, these liturgical works became property of the court, thus Weber's mention in the letter that he "had to obtain permission of His Majesty our King" in order to offer it for publication. Peters published the Konzertstück in 1823, but not the Mass, both of which were published after his death by other publishers. (Inventory #: 31322)
$4,400.00 add to cart or Buy Direct from
J. & J. Lubrano Music Antiquarians
Share this item