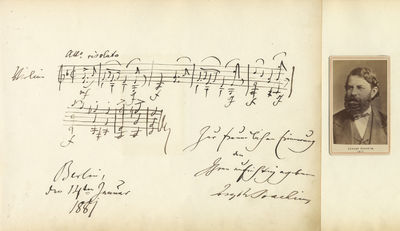 by JOACHIM, Joseph 1831-1907
1 page. Oblong folio (320 x 234 mm). 7 measures from an unidentified composition in D minor for violin, marked "Allo. risoluto." Notated in ink on hand-ruled staves. Inscribed "Zur freundlichen Erinnerung an Ihren aufrichtig ergebenen." Together with bust-length carte-de-visite portrait photograph 61 x 99 mm., Berlin, ca. 1884, mounted to card stock. Photograph slightly worn and soiled. Joachim was one of the finest violinists of the 19th century. His career brought him into contact with the leading composers of the period including Mendelssohn, Schumann, Liszt, and Brahms. "Joachim's paramount importance as an interpreter in the second half of the 19th century stems partly from his direct contact with many leading composers of the day. Like Clara Schumann among pianists, he represented a new species of 'ascetic' violinist, subordinating himself to the composer rather than glorying in his virtuoso technique. This philosophy drew him inevitably to chamber music. As a soloist he concentrated on just a handful of works: Bach's solo sonatas, the violin concertos of Beethoven, Mendelssohn, Brahms, Viotti and Spohr, and his own concertos, notably the Konzert in ungarischer Weise op.11. It was Joachim who initiated entire recitals devoted to string quartets, and in them he presented the entire classical repertory, from Haydn to Brahms." Beatrix Borchard in Grove Music Online. A fine example. (Inventory #: 31349)
$990.00 add to cart or Buy Direct from
J. & J. Lubrano Music Antiquarians
Share this item