CONCERNING LAFCADIO HEARN ... With a Bibliography by Laura Stedman 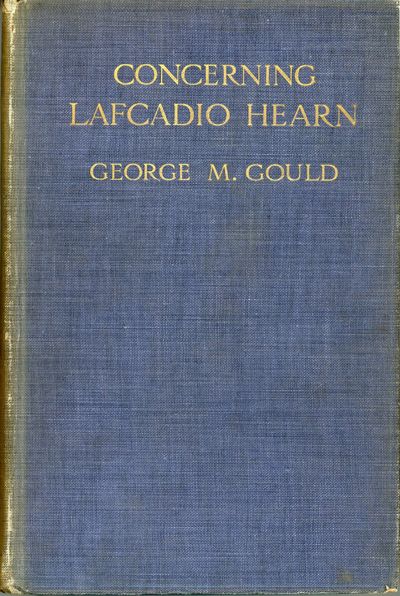 by (Hearn, Lafcadio) Gould, George M.
London: T. Fisher Unwin, 1908. Octavo, pp. [i-ix] x-xv [xvi] [1] 2-272, five inserted plates, original blue cloth, front panel lettered in gold and ruled in blind, spine panel lettered and ruled in gold, t.e.g., other edges untrimmed. First British edition. The first critical study of Hearn's writings. According to Dr. Gould, "Of Lafcadio Hearn there has been, and there will be, no excuse for any biography whatever." "... a biased attack, with some new facts." - Spiller, et al., eds., Literary History of the United States, third edition, revised (1963) II, p. 558. In 1887 George Milbry Gould (1848-1922), "physician, ophthalmologist, editor, author, ... wrote to Lafcadio Hearn who was at that time in the West Indies, an expression of his great admiration of certain of Hearn's translations. Hearn replied, and a long correspondence ensued which resulted in the removal of Hearn to the United States. When he called at the doctor's office in Philadelphia he was invited to become a guest at Gould's house, an invitation which he readily accepted. It would be difficult to conceive two characters more widely different than those of the physician, dogmatic and scientific in nature, and the irresponsible, unmoral dreamer. It is possible that Gould was interested in Hearn from a scientific standpoint, and he made every effort to reform the latter's erratic and erotic character, but he frequently expressed his admiration of Hearn's literary attainments and there is no doubt that he treated his guest with the utmost kindness and consideration. In 1908, after the publication of Elizabeth Bisland's uncritical biography of Hearn, he issued an analytical volume, CONCERNING LAFCADIO HEARN ... Gould's professional life was tempestuous. His theories and contentions, particularly in connection with the effects of eyestrain, which he held to be one of the great fundamental causes of ill health, both physical and mental, were regarded by his contemporaries as not on radical but false, though they are today widely accepted ... Nevertheless he had devoted friends and ardent admirers both in and out of his profession ... He had a marked literary gift, and it was perhaps for his contributions in the fields of medical lexicography and medical journalism that he was most widely known during his lifetime." - DAB. Cloth worn at spine ends and corner tips, spine panel tanned, some tanning to paper stock, mostly the first two leaves, a sound, good copy. (#164114) (Inventory #: 164114)
$25.00 add to cart or Buy Direct from L.W. Currey
Share this item
L.W. Currey Inc.
Offered by