American Dictionary of the English Language. 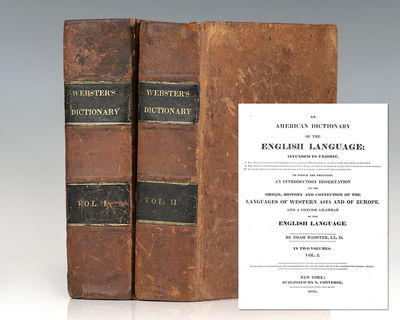 by Webster, Noah
New York: Published by S. Converse. Printed by Hezekiah Howe, 1828. Rare first edition of Webster's monumental American Dictionary, one of only 2500 copies, with frontispiece portrait of the pioneering lexicographer, in full contemporary calf. Quarto, two volumes, bound in full contemporary calf, marbled endpapers, illustrated frontispiece, tissue guard present. In near fine condition, light toning to the text. Most rare and desirable bound in contemporary calf. An exceptional example, most rare without any restoration. In 1807 Webster began compiling a fully comprehensive dictionary, An American Dictionary of the English Language; it took twenty-eight years to complete. To evaluate the etymology of words, Webster learned twenty-six languages, including Old English (Anglo-Saxon), Greek, Hebrew and Latin. Webster completed his dictionary during his year abroad in 1825 in Paris, France, and at the University of Cambridge. His book contained seventy thousand words, of which twelve thousand had never appeared in a published dictionary before. As a spelling reformer, Webster believed that English spelling rules were unnecessarily complex, so his dictionary introduced American English spellings, replacing colour with color, substituting wagon for waggon, and printing center instead of center. He also added American words, like skunk and squash, that did not appear in British dictionaries. At the age of seventy, Webster published his dictionary in 1828, registering the copyright on April 14. Webster did all this in an effort to standardize the American language. "This dictionary, which almost at once became, and has remained, the standard English dictionary in the United States, was the end-product of a stream of spelling books, grammars, readers, and dcitionaries which flowed from the pen of the industrious Noah Webster....Webster's great dictionary, all the 70,000 entries of which he wrote with his own hand, has been reprinted and brought up to date innumerable times....the book marked a definite advance in modern lexicography, as it included many non-literary terms and paid great attention to the language actually spoken. Moreover, his definitions of the meaning of words were accurate and concise...and have for the greater part stood the test of time superbly well" (Printing and the Mind of Man). "As a whole, Webster's American Dictionary was a scholarly achievement of the first order, richly deserving of its great reputation at home and abroad" (DAB). With definitions for "some 70,000 words--15,000 more than any previous English lexicon... Although only 2500 copies of the first edition were printed, the work established Webster as a lexicographer of international repute" (Lathem, 76 United Statesiana 9). (Inventory #: 102755)
$27,500.00 add to cart or Buy Direct from
Raptis Rare Books
Share this item