The History of America. 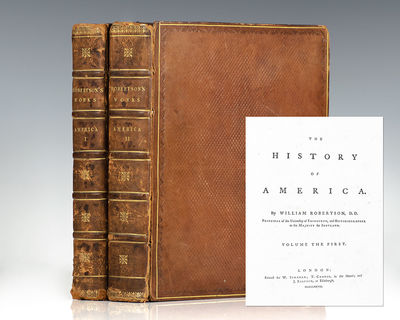 by Robertson, William
London: Printed for W. Strahan, T. Cadell, J. Balfour, 1777. First edition of this important history of America, with four large engraved folding maps by Thomas Kitchin. Quarto, bound in full contemporary diced calf, gilt titles to the spine. In near fine condition, with the maps in fine condition. An exceptional example. William Robertson's history of the discovery of America and the conquest of Mexico and Peru was the "most highly regarded secondary source of its time" (Howes, 493). From its publication until the 1840s it "held its place as the standard history of the discovery of the New World" (Honour). "Its vivid descriptions and philosophical disquisitions on aboriginal society captivated the literary world, while the outbreak of the American war lent the book pertinent public interest and rendered it more popular than either of its predecessors. Keats, who read it with enthusiasm many years after, owed to it the suggestion of his famous simile of 'Cortez and his men" (DNB). Kitchin's maps "show a fine technical facility, the lettering and decoration from his workshop among the most impressive of all English rococo work" (DNB). Sabin 71973. Howes R358. (Inventory #: 99633)
$1,500.00 add to cart or Buy Direct from
Raptis Rare Books
Share this item