The Human Eye and Its Auxiliary Organs 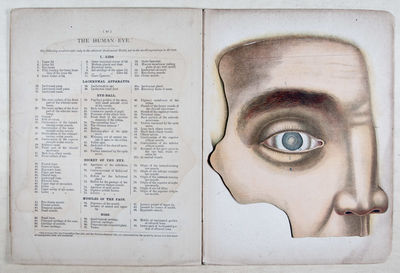 by Renlow, H. (Hermann); John Browning (intro and ed. by)
London: George Philip & Son, 1896. First English language edition. Hardcover. g- to vg. Quarto. 20pp. + fold-out model. Red cloth spine over illustrated tan paper boards, with black lettering on the front cover. This informative early modern optometrical work discusses the physiology and anatomy of the human eye. The book is illustrated with a number of detailed engraved b/w figures throughout, and a beautifully produced multilayered full color chromolithographic fold-out model of the eye, nasal passage, and surrounding muscles of the human face, on the interior back cover. This detailed fold-out is accompanied by a detailed key, enumerating and labeling 99 different parts of the model. Binding with a large chip to the bottom right corner of the front cover, and some additional light rubbing and/or chipping to other extremities. Front cover with a vertical crease, and some light staining at the top right corner. Interior with some minor to light sporadic foxing and water stains to the pages throughout. Binding looses along gutter. Binding in very good-, interior in good condition, model in very good condition overall. Protected by modern mylar. * There are known German and Swedish editions printed the same year, an Italian edition published the following year, and a Spanish translation published at an unknown date. It is not known if this English-language edition is the first or the German (both published the same year). John Browning (c. 1831-1925) was an English inventor and manufacturer of scientific and medical instruments. He was an optician who was particularly known for his ophthalmic instruments, and was a founder and the first president of the British Optical Association (1895), the first body of its kind for professional optometrists. He is considered by many to have been the first first professional optometrist. (Inventory #: 13671)
$350.00 add to cart or Buy Direct from
Eric Chaim Kline Bookseller
Share this item