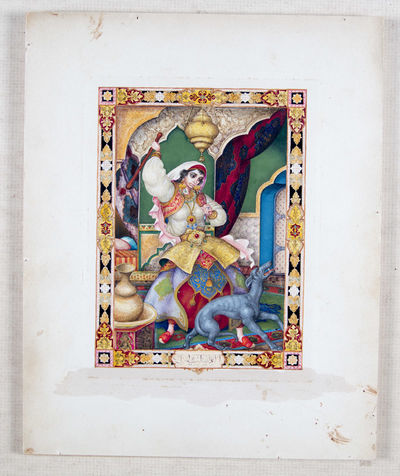 by Szyk, Arthur
NP: NP, 1954. Original artwork. Loose leaf. g+ to vg. Gouache on cardboard. (5 5/8 x 4 3/8"). Miniature Arthur Szyk was commissioned to execute the artwork for the four volume set of the 1954 Limited Editions Club publication of Arabian Nights Entertainments.* The miniature painting is typical for Szyk's mature style, executed in rich colors and patterns with elaborate decorative border. It was Szyk's final work and he finished only sixty of the one hundred paintings planned for this series before his death in 1951. Our image, the History of Sidi Nu'uman, is reproduced opposite page 647 of volume two of the Arabian Nights. It illustrates the life of the Grandee of the land Sidi Nu'uman, and his wife Aminah. Although this work is not signed, it was authenticated by Irvin Ungar after being sold at Sotheby's New York in 2008. Framed behind glass in gilt wooden frame with teal velvet pas-par tout and slanted gilt inner border. Frame and pas-par tout with light wear. Frame and pas-par tout in overall good+, gouache in very good condition. * "George Macy (Founder of the Limited Edition Club) wrote that Szyk 'was born to illustrate The Arabian Nights.' This new, 'definitive', fully annotated version provided the opportunity. Szyk's contract for the book dates from January 1945 and represents the only specific item in a continuing, open-ended agreement with the publisher (p. 224, Ansell)... The Arabian Nights illustrations are slightly looser or rougher in paint application than most of Szyk's other works. Quite often, individual brush or quill strokes are visible, especially in the highlights and shadows. (This phenomenon is particularly noticeable in the flesh-tone areas.) The increased emphasis on a linear 'drawn' element, in contrast to the subtler shading employed elsewhere in his oeuvre, creates a woven, tapestry-like effect, with the strokes taking on the appearance of threads. (pp. 227-228, Joseph P. Ansell, Arthur Szyk). (Inventory #: 45854)
$12,500.00 add to cart or Buy Direct from
Eric Chaim Kline Bookseller
Share this item