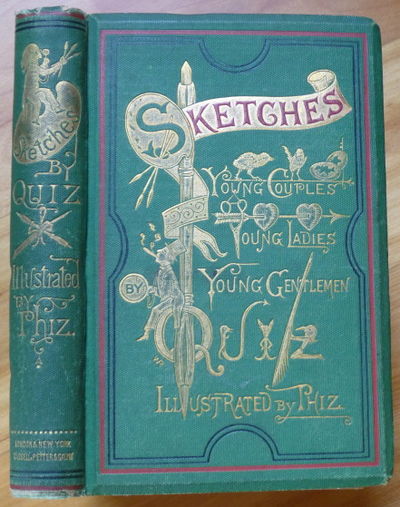 by [Dickens, Charles]
1869. By Quiz [sic]. Illustrated by Phiz. London: Cassell, Petter, and Galpin; and 596 Broadway, New York, n.d. [1869]. 2 pp undated ads. Original bright green cloth decorated in gilt, black and red, beveled. First American Collected Edition of all three "Sketches" -- two of which actually were written by Charles Dickens. In 1837 SKETCHES OF YOUNG LADIES had been pseudonomously written by "Quiz" (actually Rev. Edward Caswall) -- classifying these "members of the animal kingdom" into such categories as "Lazy Young Ladies," "Stupid Young Ladies," "Petting Young Ladies" and "Manly Young Ladies." The following year Dickens wrote SKETCHES OF YOUNG GENTLEMEN (anonymously -- not even using his pseudonym "Boz") as a protest against the earlier book -- in fact urging women to read his book on men as the "antidote" for Caswall's earlier one. Finally, Dickens also wrote SKETCHES OF YOUNG COUPLES, published anonymously in 1840, and in England all three were published together in 1843. The first two titles (LADIES and GENTLEMEN) were in 1838 collected in one volume both by Carey Lea & Blanchard and by Wiley & Putnam, but this 1869 volume was the first American to collect all three -- albeit inaccurately ascribing them all to "Quiz." This copy, with the American address added to the title page, is what Smith calls a "subsidiary edition," or "the American issue of the English impression." This is a handsomely bound book, with binding design (initialed "WR") by the Scottish binding designer William Ralston. It is in very good-plus condition (minor wear at the extremities, endpapers cracked). Smith pp 5-8; Podeschi/Gimbel (Yale) D56; not in Carr (UTexas). Provenance: signed in pencil by Walter Smith, this is the copy described and photographed in his 2019 bibliography. (Inventory #: 14383)
$395.00 add to cart or Buy Direct from
Sumner & Stillman
Share this item