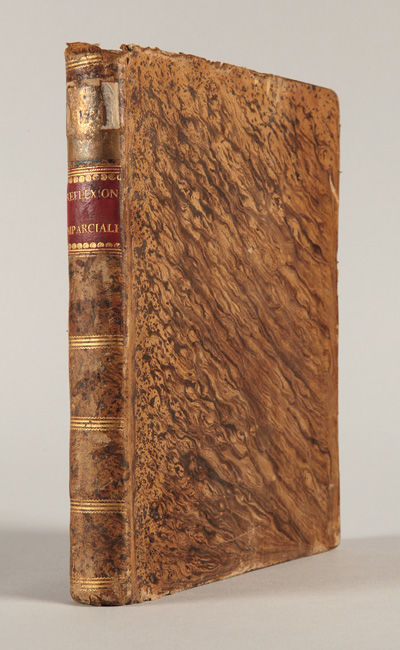 by Nuix, Juan: Varela y Ulloa, Pedro, translator
Madrid: Por D. Joachin Ibarra..., 1782. [4],lii,315pp. Half title. Late 19th-century mottled calf, spine gilt, gilt leather spine label. Moderate shelfwear and some scuffing to edges, chipped at head of spine and with remnants of shelf sticker. Endpapers splitting along hinges, inked number on half title, otherwise internally clean. Very good. The first Spanish edition of this significant defense of Spanish atrocities against the native peoples of the Americas. Originally written by an exiled Spanish Jesuit living in Italy, this edition was translated from the original Italian and includes a thirty-page preliminary section by the Spanish translator new to this edition, and four leaves of the translator's introduction. Juan Nuix drew from the writings of Raynal, Robertson, and Las Casas in his detailed appraisal of the controversy surrounding Spanish treatment of the native population in the Americas. He argues that claims of Spanish barbarism were exaggerated and rooted in earlier accounts by Raynal and Las Casas that were then propagated by historians such as Robertson. Though he recognizes the violence perpetrated against the Indians, Nuix defends Spanish colonialism as a grand and greater good brought to the Americas. He largely blames the indigenous Americans for their lack of fortitude - both in their susceptibility to disease and in their laziness - and argues that these factors, not Spanish cruelty, were responsible for the depopulation of the region. Nuix also claims that it is the natives' fault they were not prepared to work in mines and on plantations. The translator's introduction reinforces Nuix's claims that the Spanish colonial officials did not act out of step with other colonial powers in the region. Varela y Ulloa further argues that the atrocities credited to the Spanish were carried out by private individuals, not the Spanish government, shifting the blame and presenting colonialism as a benign strategy. "The author would have rendered a more important and honourable service to Spaniards if, instead of endeavouring to disculpate them from calumnies, not entirely without foundation, he had manifested to foreigners the useful measures which the Spanish Ministry were taking to remedy the abuses of their colonial government" - Sabin (quoting Sempere y Guarinos' ENSAYO DE UNA BIBLIOTECA ESPAÑOLA). The printer of this work, Joaquín Ibarra y Marín, was an important and prolific Spanish technician responsible for many advancements in the printer's arts, namely improvements in paper, the standardization of type production, and the creation of new ink formulas. He is most famous now for his beautiful 1780 edition of DON QUIXOTE, which is usually referred to as the "Ibarra Don Quixote." Printed just two years later, the present work carries similar traits as the Ibarra Quixote, namely handsome paper and impeccable composition. PALAU 196692. MEDINA, BHA 5007. SABIN 56309. RUIZ LASALA, IBARRA 646. (Inventory #: WRCAM54949)
$1,500.00 add to cart or Buy Direct from
William Reese Co. - Americana
Share this item