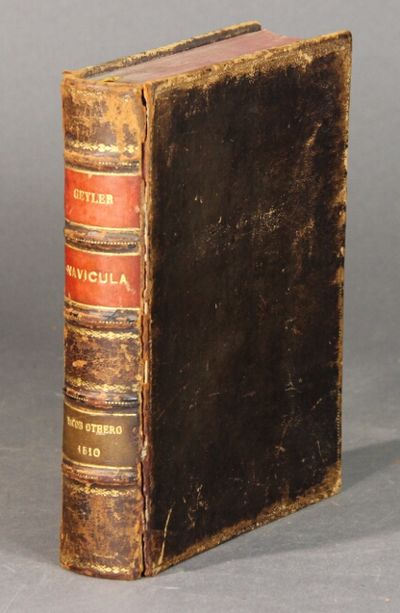 by Geiler von Kaysersberg, Johannes, & Beatus Rhenanus
[Strassburg, 1510. First edition, 4to, collating 1-28 34 A4 B-C8 D4 E-F8 G4 H-I8 K4 L8 M4 N-O8 P4 Q8 R4 S-T8 U-X4 Y8 Z4 Aa4 Bb8 Cc4 Dd8 Ee-Ff4 Gg8 Kk8 Ll4 Mm4 Nn-Oo8 Pp-Qq4 Rr-Ss8, [284] leaves (complete), but with 8 leaves misbound, i.e. 2 leaves misbound in the second gathering; C4 and C5 misbound in gathering E; O7 and O8 bound out of order; Hh8 bound in before Dd1; and Ii4 bound before Gg1; woodcut on title page of a ship with three passengers and a rower; large woodcut of a jester and a man upside down in a cart on the verso of the last leaf of the index - both images based on Sebastian Brandt's Narrenschiff, some of which have been attributed to Durer by some, to Burgkmeier by others. 19th century Mexican calf, gilt rule on covers, spine in 6 compartments, red and brown leather labels in 3, top edge stained red, floral endpapers; upper joint cracked, cords holding; small worm tracks neatly repaired with japanese tissue in the first ten leaves (very minor losses), some leaves strengthened in the gutter margin, and other small repairs, old marginal annotations, occasional dampstains; a large copy (20.5 x 15 cm). Geiler (1445-1510), the Strasburg preacher, was "a widely read man not only in theology, but also in the secular literature of the day. This is shown by the sermons having Sebastian Brandt's 'Ship of Fools,' which appeared in 1494, for their theme; these sermons attained the greatest popularity. Geiler displayed, also, exceptional facility in using public events to attract and hold the attention of his hearers" (Catholic Encyclopedia). The Navicula consists of 37 sermons based on Brandt's Narrenschiff (Ship of Fools) preached by Geiler from his Strassburg pulpit in the late 15th or early 16th century. He was among the most powerful preachers of the period, and these sermons on the abuses and follies of the age were to secure the enduring popularity of his friend, Sebastian Brandt's greatest work. Geiler was a harsh critic of what he saw as a decay of faith in the early stages of the Reformation as championed by Luther and his followers, and was resolute in his defense of the established Roman Church in Germany. This first edition precedes the more famous one printed in 1511 with more woodcuts. Adams G-315; Brunet II, 1576; Ebert 8235; Graesse III, 41; BM-STC Germany, p. 335. (Inventory #: 54480)
$4,830.00 add to cart or Buy Direct from
Rulon-Miller Books
Share this item