Under the patronage of the King. Nature displayed in her mode of teaching language to man; being a new and infallible method of acquiring a languages with unparalleled rapidity; deduced from the analysis of the human mind ... adapted to the French ... To which is prefixed a development of the author's plan of tuition.. 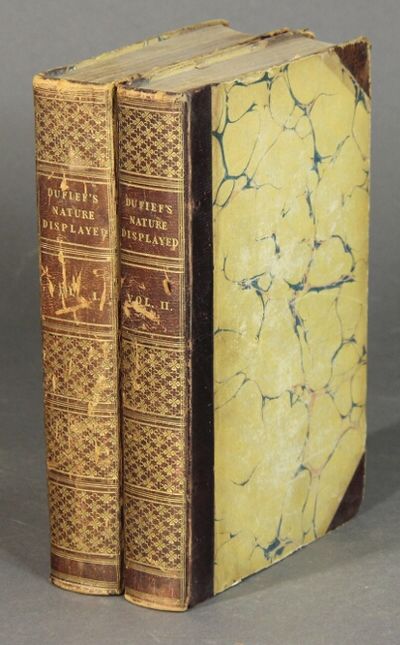 by Dufief, N. G.
London: printed for, and sold by the author, 1822. Fifth edition "considerably improved and enlarged," 2 volumes, 8vo, each volume with 2 parts in 1, the second parts in French and with French title pages; pp. xviii, cxx, [4], 416, [2], 149, [1]; [2], vi, 344, [2], 261, [1]; contemporary quarter calf over yellow marbled boards, smooth gilt decorated spines, gilt-lettered direct; extremities rubbed, spines with several scrapes; all else good and sound. Dedicated to not to Locke, Condillac and Sicard, as in earlier editions, but now rather "To the King:" "I should not have presumed to approach your Majesty with this Dedication, had I not been convinced, by the success of repeated experiments, that the work which I have now the honour to submit to the notice of your Majesty possesses such a degree of public utility, as may render it worthy of Monarch, the splendid achievements of whose Regency, and the distinguish liberality of whose patronage of literature, have obtained for him the highest respect and admiration from all nations ... Nor can I omit to acknowledge that some personal motives have also swayed me on this occasion. I must ever remember the liberal and gracious reception which I experienced from the generous hospitality of England, when I first landed, in the year 1792, in your Royal and venerable Father's dominions; happy to escape from the revolutionary frenzy of a nation then a prey to all the horrors which faction, and the dissolution of moral and religious ties, inevitably induce." Also with a separate dedication to his mother. Dufief was a Franco-American bookseller in Philadelphia, and a professor of the French language, whose innovative methods of teaching "eschewed grammatical rules and endorsed the learning of phrases and sentences rather than solitary words" (Stern, Nicholas Gouin Dufief of Philadelphia, p. 12). It was a method adopted by schools around the country, and the book went through at least 21 editions over the next 45 years. Cambridge, BL and U. Missouri at Columbia are the holdings in OCLC for this London edition. (Inventory #: 54512)
$402.50 add to cart or Buy Direct from
Rulon-Miller Books
Share this item