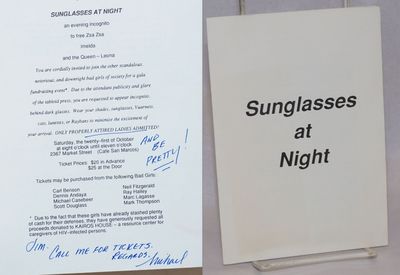 by Ms. Charlotta Manure
San Francisco: Kairos House, 1989. Four-panel invitation card, 5.25x7.25 inches, humorous call to arms (and heels & gowns) to raise funds for the three incarcerated Divas - Zsa Zsa Gabor, Imelda marcos & Leona Helmsley - followed by information on the event (with notes in ink signed Michael [Casebeer]) and on rear panel information on Kairos House the Roman Catholic non-profit service for people with AIDS/HIV, very good on heavy white card stock. Likely 1989 as Leona Helmsley, Zsa Zsa and Marcos were all involved in legal problems and incarceration that year. Ostensibly raising funds for their defense but actually (and noted) raising funds for Kairos which had formed in 1988. (Inventory #: 240495)
$25.00 add to cart or Buy Direct from Bolerium Books
Share this item

Remember Centralia. Don't patronize Our House / Corner Washington and Occidental. They contributed to a fund to convict our boys in Centralia. They use scab coal from Pacific Coast Coal Company. We never forget! [leaflet]

[Seattle] : [Industrial Workers of the World] , 1920
(click for more details about Remember Centralia. Don't patronize Our House / Corner Washington and Occidental. They contributed to a fund to convict our boys in Centralia. They use scab coal from Pacific Coast Coal Company. We never forget! [leaflet])