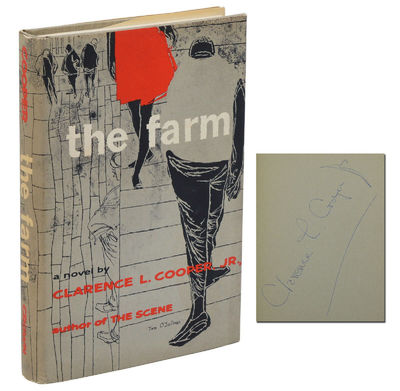 by Cooper, Clarence, Jr.
New York: Crown Publishers Inc, 1967. First Edition. Near Fine/Near Fine. First edition. Review copy with publisher's slip laid in. Signed by author diagonally on front free endpaper. [viii], 248 pp. Gray cloth with reddish orange spine lettering. Near Fine with slight curve to back board, small spot on top edge slightly abraided, in Near Fine unclipped dust jacket, a little toned with age, light soil to rear panel. Nice shape overall. Cooper was an African American author who chronicled the seedy side of life, wrestled with drug addiction, and died in penniless obscurity. The Farm chronicles the struggles of a black inmate at the United States Narcotic Farm in Lexington, Kentucky. This facility, as documentary The Narcotic Farm put it, "was a humane hospital set on 1,000 acres of farmland where drug addicts could recover from their habits. On the other hand, it was an imposing federal prison built to incarcerate convicted addicts." It was also where a battery of infamous medical experiments took place. In a 2007 Guardian review of the book Tony O'Neill writes of Cooper's novel: The Farm was written in 1966, while Cooper was serving time for a drug offence. Radically different in both style and tone from his earlier work, it is the work of a man who knows he has a final chance to write something GREAT. After the critical success of The Scene, and the humiliation of his later works being relegated to pulp outfit Regency House, the incarcerated 32-year-old played every card he had. In The Farm, Cooper's language is flowing and experimental: he creates words, plays with syntax, and everything moves in an irresistible rhythm. His final novel. Scarce signed, as are all of the author's books. (Inventory #: 140938702)
$800.00 add to cart Available from
Burnside Rare Books
Share this item
Burnside Rare Books
Offered by

The Vestal Lady on Brattle