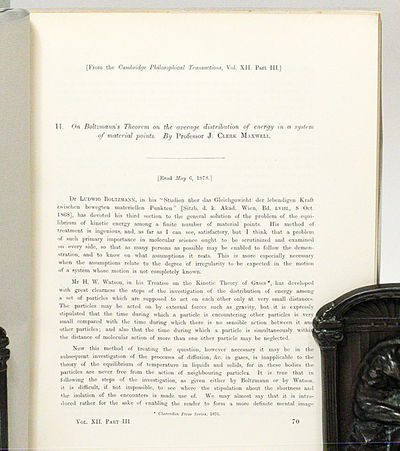 by MAXWELL, JAMES CLERK
Cambridge: Cambridge University, 1879. First edition offpring. modern wrappers. Fine. FIRST EDITION, SCARCE OFFPRINT, ONE OF MAXWELL'S MAJOR PAPERS ON GAS THEORY AND STATISTICAL MECHANICS. "Maxwell's enthusiastic follower Ludwig Boltzmann had published two superb papers on gas theory in 1868 and 1872. Taking Maxwell's idea of the velocity distribution of molecules in a gas, he had derived a more general law for their energy distribution-now known as the Maxwell-Boltzmann distribution. He had also generalised Maxwell's principle for the equipartition of energy, showing that it should be divided equally not only between modes of linear and rotational movement but among all the independent components of motion in a system. "Maxwell had inspired Boltzmann; now he was inspired in turn. The new results were wonderful... Maxwell responded with a masterful paper, On Boltzmann's Theorem on the Average Distribution of Energy in a System of Material Points. This work, more than any other, laid the foundations for the development by Boltzmann and others of statistical mechanics-an esoteric but useful subject which enables physicists to explain the properties of matter in terms of the behaviour, en masse, of its molecules. He derived the velocity and energy distribution in a powerful new way, which gave the equipartition principle as a by-product. One of the key ideas in the paper was what came to be called the method of ensemble averaging, in which the actual system under study is replaced by a statistically equivalent arrangement that is much easier to analyse. The highly mathematical analysis concluded with a practical application directly from the theory: gaseous mixtures could be separated by means of a centrifuge. Many years later this became a standard commercial technique." (Basil Mahon, The Man who Changed Everything: The Life of James Clerk Maxwell). OFFPRINT FROM: Transactions of the Cambridge Philosophical Society, Vol XII, Part III, pp. 547-570. Cambridge: The University Press, 1879. Quarto, modern wrappers; custom box. Fine condition. An exceedingly rare offprint of a major Maxwell paper. (Inventory #: 2275)
$2,300.00 add to cart or Buy Direct from
Manhattan Rare Book Company
Share this item