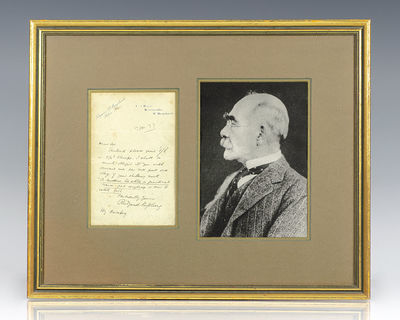 by Kipling, Rudyard
1897. Rare autograph letter signed and entirely in the hand of Nobel Prize-winning author Rudyard Kipling. Dated January 17, 1897 on Rock House letterhead, the letter reads, "Dear Sir, Enclosed please find 31/20 in 2 1/2 stamps: I shall be much obliged if you will forward me per work post one copy of your shilling work "A modern treatise on practical coarse fish angling or how to catch fish. Faithfully yours, Rudyard Kipling." In near fine condition. Double matted and framed with a portrait of Kipling. The entire piece measures 12.25 inches by 15 inches. Rare and desirable. English journalist, short-story writer, poet, and novelist Rudyard Kipling's major works include The Jungle Book (1894), Kim (1901) and many short stories and poems. Kipling was born in India, which inspired much of his work and his innovative stories for children have become timeless classics. Kipling was one of the most popular writers in the British Empire, in both prose and verse, in the late 19th and early 20th centuries and was awarded the Nobel Prize in literature in 1907. (Inventory #: 95224)
$1,500.00 add to cart or Buy Direct from
Raptis Rare Books
Share this item