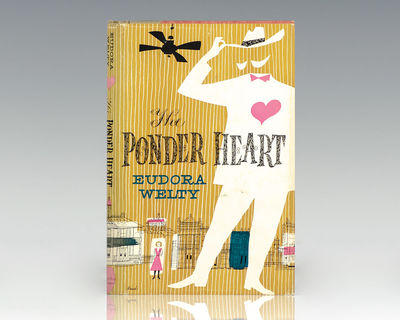 by Welty, Eudora
New York: Harcourt, Brace and Company, 1954. First edition and advance review copy of Welty's third novel. Octavo, original half cloth, illustrated with drawings by Joe Krush. Near fine in a very good dust jacket. With the publisher's advance copy slip dated January 7th 1954 laid in. Jacket photograph of Welty by Kay Bell. Eudora Welty won the 1973 Pulitzer Prize and was later awarded the Presidential Medal of Freedom. She was also the first living author to have her works published by the Library of America. Originally published in The New Yorker in 1953, Welty's The Ponder Heart follows the story of wealthy heir Daniel Ponder, as told through the eyes of his niece. In 1956, the story was made into a Broadway play by Joseph Fields and Jerome Chodorov. Una Merkel won the Tony Award for Best Featured Actress in a Play for her portrayal of Edna Earle Ponder in the play. (Inventory #: 90417)
$325.00 add to cart or Buy Direct from
Raptis Rare Books
Share this item