The Wonderful Wizard of Oz. 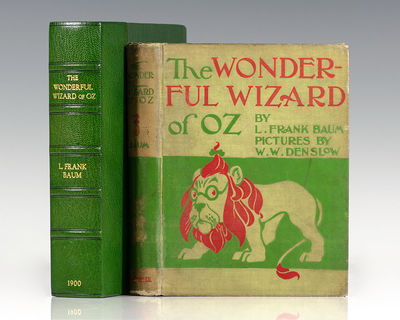 by Baum, L. Frank; Illustrated by W.W. Denslow
Chicago & New York: George M. Hill & Company, 1900. First edition, second state of "the first truly enduring American fantasy" (Connolly, 38). Octavo, original pictorial green cloth, illustrated by W.W. Denslow with 24 color plates, many illustrations in text, and on paste-downs (issued without endpapers). Hanff & Greene I, state 2 of text and plates, binding variant B with un-serifed red publisher's imprint at foot of spine; Peter Parley to Penrod, state Z, title state C/D. In very good condition with some professional restoration to the joints. Housed in a custom half morocco and chemise box. Frank L. Baum worked in many trades before he wrote The Wonderful Wizard of Oz, including publisher, poultry breeder, door-to-door salesman and newspaper editor. "Among the five Baum titles published in 1900, preeminent even then was The Wonderful Wizard of Oz. The New York Times found it 'bright and joyous' and omnisciently offered, 'It will indeed be strange if there be a normal child who will not enjoy the story.' The first edition was a picturesque novelty with its 24 color plates and many line drawings; Denslow's conceptions of the characters and landscapes contributed immeasurably to the book's popularity" (Fricke, 22). Baum "set out to change children's books and made a lasting contribution to American literature The Wizard of Oz has entered American folklore. It reflected and has altered the American character" (Hearn, xiii). "Those who read the Oz books are often made what they were not—imaginative, tolerant, alert to wonders, life" (Gore Vidal). (Inventory #: 102548)
$12,500.00 add to cart or Buy Direct from
Raptis Rare Books
Share this item