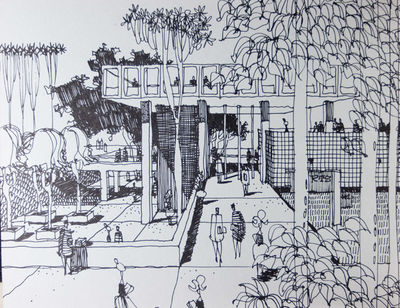 by Jones, A. Quincy; Frederick E. Emmons (Consulting Architects)
Los Angeles: A. Quincy Jones; Frederick E. Emmons, 1967. Original document. Softcover. vg to fine. Oblong Quarto. (16) 191 (1)pp. Original gray wraps with black lettering on cover and spine. Illustrated inside covers. Time - phase Development of Campus, 1968-2002 for ultimate enrollment of 20,000 students. Submitted to the trustees of the California State Colleges. This Master Plan culminates five years of cooperative effort by the chancellor's office, the college faculty and staff, and the architects. Originally to be located in Palos Verdes, California, the designated location for the campus was moved to Dominguez Hills in soon to be the city of Carson, California in 1965. Asides of the high land prices in Palos Verdes, the Watts Riots had exposed the need for a campus to serve the population of South Los Angeles. In 1964 the architect A. Quincy Jones started to design the master plan for the new university. Beautifully illustrated with architectural drawings and plans throughout. Descriptive list of drawings at front, cost estimates at rear. Today the university is known as one of the most ethnically and economically diverse universities in the western United States. Light sunning of spine and minor spots on front cover, inked line on back cover. Else in fine condition. (Inventory #: 45860)
$125.00 add to cart or Buy Direct from
Eric Chaim Kline Bookseller
Share this item