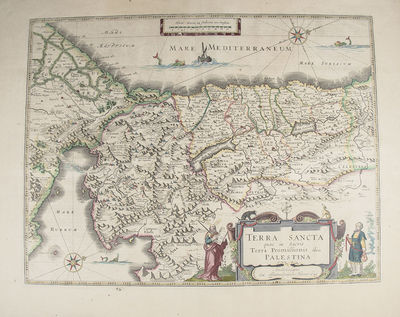 by [Hondius, Jodocus]
Amsterdam: Blaeu, W, 1634. Copper engraved, hand-colored map of one of the most decorative map of the Holy Land of the 17th century. One page with hand-colored borders, the map depicts the tribes of Israel and the route the Israelites took from Egypt through Sinai into Canaan. In the sea there are three sea monsters, one of which has targeted a fishing vessel. The title cartouche is guarded by two dogs, draped with fruit, and flanked by Moses inscribing the ten commandments and a Jewish high priest. In fine condition. Double matted and framed. Originally engraved for Jodocus Hondius, at his death in August, 1629, this map was among 39 other Hondius copper plates that were purchased by Willem Blaeu who deleted Hondius' name and added his own to the imprint. Blaeu then immediately published 34 of them as part of his first atlas. (Inventory #: 101741)
$3,500.00 add to cart or Buy Direct from
Raptis Rare Books
Share this item