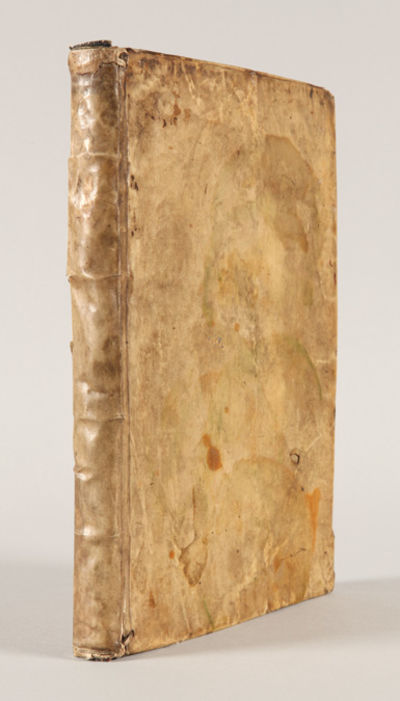 by Herrera y Tordesillas, Antonio de; P. Ordonez de Ceballos; and Jacques Le Maire
Amsterdam: Michiel Colijn, 1622. Three titles,separately paginated but issued together. Printed title-leaf, engraved title- leaf, [4],111pp. plus fourteen double-sheet engraved maps; second title-leaf, 3-29pp.; blank leaf, third title-leaf, engraved portrait of Le Maire on verso, seven dedication and preface leaves, 72pp., numbered leaves 73-85, plus three engraved maps (two double-sheet, one folding), and including five engraved illustrations in the text. Folio. Contemporary vellum. Minor repairs to spine ends, short split to rear joint, some soiling. Lacks free endpapers. Early ink notations on front pastedown, first few leaves mounted on stubs, fore-edge of first title-leaf strengthened. Internally clean. Very good. Three highly important accounts of New World and Pacific explorations, bound together as issued. Most significant is the first publication of the full journal of Jacques Le Maire's circumnavigation, the first voyage to successfully round Cape Horn. Antonio de Herrera's account is derived from the Spanish original, first published in Madrid in 1601. It was next published in Latin, French, and Dutch editions, all issued in Amsterdam in 1622, using the same engravings (there are some variations in the compositions of the various editions). All editions are now rare. This Dutch-language edition of Herrera was issued with the two additional works: that of Ceballos on the West Indies, and Le Maire's highly-important account of his voyage to Australia. The portrait of Le Maire on the verso of the third titlepage, present here in a fine impression, is often absent. The first two parts of the present volume concentrate on knowledge of the New World, with excellent maps of Central and South America, and those of the Pacific Coast adding considerable new information to geographical knowledge. In addition, the Latin titlepage to Herrera's work is decorated with the Castilian arms, vignettes of six Aztec gods, and Mexican scenes. It is the third work bound here, however, that is of the greatest interest. Therein, Le Maire's voyage in search of Terra Australis is described in full. This work represents the first true publication of the journal of the Le Maire-Schouten expedition around the world (as opposed to that published by Blaeu under Schouten's name in 1618 [see Schilder, pp.34-36]). Sailing through Le Maire Strait and rounding Patagonia via Cape Horn, this voyage had an enormous effect on future navigation, helping to put an end to the idea of the imaginary Southland. Also, Le Maire's discovery of and voyage around Cape Horn relieved the trading monopoly of the East India Company by finding an alternative route to the East Indies that did not violate the Company Charter, which prevented other Dutch trading companies from using the existing routes of the Straits of Magellan and Cape of Good Hope. Partly inspired by Quiros and motivated by Dutch trading zeal, this was the essential precursor to Tasman's voyage. Indeed, Tasman made great use of Le Maire's mapping of the ocean. The Le Maire voyage, the last of the 17th-century expeditions to search for the unknown continent from the East, was responsible for extensive discoveries in the Pacific, shown in excellent detail on the various maps contained herein. There are also four fine engraved views, three of which show the Eendract at anchor in the Solomon and Cocos islands. The small map on the titlepage (of both the first and third works here) is of particular importance because it is the earliest published cartographic representation of California as an island. Further, the magnificent series of double-sheet maps includes thirteen of North, Central and South America, while the remaining four are particularly impressive representations of the Pacific. One in particular, larger than the others, depicts Le Maire's route through the ocean, with detailed mapping of New Guinea and of the Pacific island groups visited. Le Maire's voyage in 1616 resulted in a large number of Pacific discoveries, but it also established for the first time that New Guinea was not part of a great continent extending indefinitely to the East. This new knowledge entirely altered the European perception of the archipelago, which had remained unchanged since 1545. Herrera was official historian to kings Philip II, III, and IV, and his NIEUWE WERELT is essentially a precursor to his magnum opus, HISTORIA GENERAL DE LOS HECHOS DE LOS CASTELLANOS EN LAS ISLAS TERRA FIRME DEL MAR OCEANO, which eventually covered eight decades of voyages and travels published in 1601-1615. Not in Hill, Church or Jones. EUROPEAN AMERICANA 622/69 621/93, 622/78. WAGNER SPANISH SOUTHWEST 12d. SABIN 14348,31542,14352,14353,44059. BORBA DE MORAES, p.400. JCB II:166, II:156, KROEPELIEN 561 (Latin ed). PALAU 114296, 203656 (note). TIELE, pp.56-7,314-16. STREIT II:1533. POLK, THE ISLAND OF CALIFORNIA, p.283, plate 43. LEIGHLY 1. McLAUGHLIN TITLEPAGE AND FRONTISPIECE CHECKLIST 1. Sharp, DISCOVERY OF THE PACIFIC ISLANDS, pp.73-78. Schilder, AUSTRALIA UNVEILED, pp.32-36 and passim. (Inventory #: WRCAM54950)
$16,500.00 add to cart or Buy Direct from
William Reese Co. - Americana
Share this item