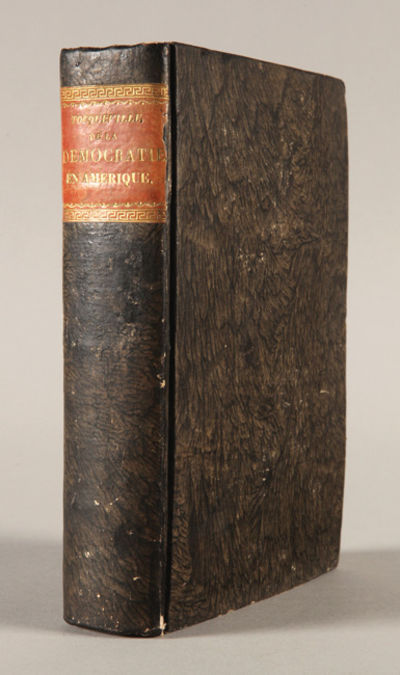 by Tocqueville, Alexis de
Paris: Charles Gosselin, 1835. Two volumes bound in one. [4],xxiv,367; [4],459pp. plus hand-colored folding map. Half title in each volume. Contemporary French marbled paper boards, gilt morocco label. Minor shelf wear, some rubbing to boards. Moderate toning, stamp removed from titlepage and margin of one text leaf in first volume. Very good. The first edition of the first part of Tocqueville's famous classic, DEMOCRACY IN AMERICA, one of the most famous investigations of the American political system. Alexis de Tocqueville came to the United States in the spring of 1831, accompanied by his friend and fellow student, Gustave de Beaumont. Their original goal was to study the penitentiary system of the United States. After visiting prisons in the East they undertook a tour of the South as far as New Orleans, ascended the Mississippi, visited the Great Lakes and Canada, and returned via New York, having travelled for nine months. After writing their report on prisons, Tocqueville began work on the first part of DEMOCRACY IN AMERICA in 1833-34 and published it, in an edition of less than 500 copies, in January 1835. The book was an instant success, and numerous editions, many with revisions, followed quickly, and the second part, first published in April 1840, was issued concurrently with the eighth edition of the first part. There were probably more than fifty editions in English and French published before 1900, besides numerous other translations. Almost from the beginning Tocqueville's study enjoyed the reputation of being the most acute and perceptive discussion of the political and social life of the United States ever published. Remarkably, it has sustained its appeal generation after generation, as new readers find it speaks to their time with a contemporary voice. Whether perceived as a textbook of American political institutions, an investigation of society and culture, a probing of the psyche of the United States, or a study of the actions of modern democratic society, the book has continued to offer insight and provoke thought since its inception. It has also probably provided commentators with more quotations than any other work about the United States. HOWES T278, "aa." SABIN 96060. CLARK III:111. Library of Congress, A PASSION FOR LIBERTY, ALEXIS DE TOCQUEVILLE ON DEMOCRACY & REVOLUTION (Washington, 1989). (Inventory #: WRCAM48814B)
$13,500.00 add to cart or Buy Direct from
William Reese Co. - Americana
Share this item