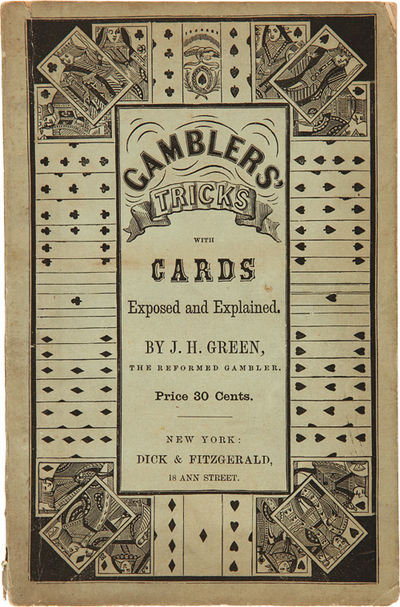 by Green, J[onathan]. H.
New York: Dick & Fitzgerald, Publishers, 1868. 114pp., including in-text illustrations, plus [42]pp. of advertisements. Original printed light green wrappers. Slight discoloration to wrappers, corners and spine ends moderately chipped. Internally quite clean. Very good. Jonathan H. Green, "the reformed gambler," is the most important figure in the early literature of American gambling. A famed gambler in his youth, he was known for his talents from Texas to Boston and all points in between. He abandoned gambling just shy of age thirty, and became an advocate against it, seeking to expose the tricks of the trade. Here he offers the inside scoop on games such as Dog Loo (played on the Red River), Whist, Thimbles (or cups), Poker, and Euchre, and on techniques such as palming, lapping, forcing cards, shuffling, cutting, dealing, stocking the pack, and cogging dice. Many other interesting subjects are also discussed, including horse racing, and nailing a card to a wall by a pistol shot. Green adds numerous tales of personal experience, and by offering detailed information on how to recognize gamblers' tricks, Green is also providing an advanced tutorial for the aspiring gambler or cheat. The copyright date on the verso of the titlepage appears to read 1850 (the first year of publication), but the worn type throughout, as well as the other titles advertised as available by Dick and Fitzgerald, indicates that this edition was likely produced around 1868. The original price, printed on the front wrapper, was thirty cents. In any edition, a rare and significant work. TOOLE-STOTT 324. (Inventory #: WRCAM54992)
$1,500.00 add to cart or Buy Direct from
William Reese Co. - Americana
Share this item