Genetics of the Evolutionary Process 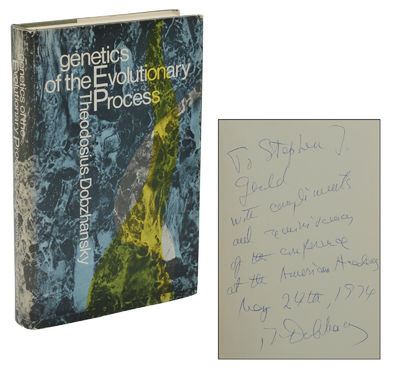 by Dobzhansky, Theodosius; [Gould, Stephen Jay]
New York: Columbia University Press, 1970. First Edition. Fine/Near Fine. Signed. First edition, first printing. A fantastic association copy linking two titans of evolutionary biology, inscribed by Theodosius Dobzhansky "To Stephen Jay Gould with compliments and reminiscences of the conference of the American Academy May 24, 1974." Fine, in a Near Fine dust jacket with fading to spine and faint edge wear. Both Dobzhansky and Gould played an important role in shaping evolutionary thought in the 20th century. Widely hailed as the father of evolutionary genetics, Dobzhansky was a co-founder of the modern synthesis--integrating evolution with genetics, reconciling the difference between Darwin's theory of evolution and Gregor Mendel's thoughts on heredity. And in the generation following, Gould was one of the most influential and widely read figures. Gould's major contribution to the field was his theory of punctuated equilibrium, which postulates that evolution is characterized by long periods of stability, infrequently punctuated by rapid periods of branching speciation. Or, evolution by jerks. Dobzhansky inscribed this book to Gould at the Workshop of Evolutionary Synthesis, held in Boston in May of 1974. In Gould's book on macroevolution and the historical development of evolutionary theory, The Structure of Evolutionary Theory, he recalls the event, "The Conference--an amazing experience for a young evolutionist at the beginning of a career--included every major living participant in the Synthesis except Bernard Rensch, who was ill; G. G. Simpson, who was angry; and Sewall Wright, whom [Ernst] Mayr simply would not invite, despite pleas from yours truly and several others. I don't think I ever experienced a greater moment of pure 'academic awe' than my first impression, when I looked across from 'our' side of the table (where Mayr had placed the 'young' historians and evolutionists) and saw Dobzhansky, Mayr, Stebbins, Ford and Darlington all together on the other side." A superb association copy between two leading lights, and in a sense, passing the mantle of evolutionary biology from one generation to the next. Inscribed by Dobzhansky the year before his death to a young Stephen Jay Gould, who at the time was just embarking on his career. (Inventory #: 140938736)
$6,000.00 add to cart Available from
Burnside Rare Books
Share this item
Burnside Rare Books
Offered by

San Francisco : City Lights Books
(click for more details about Howl)
View all from this seller>