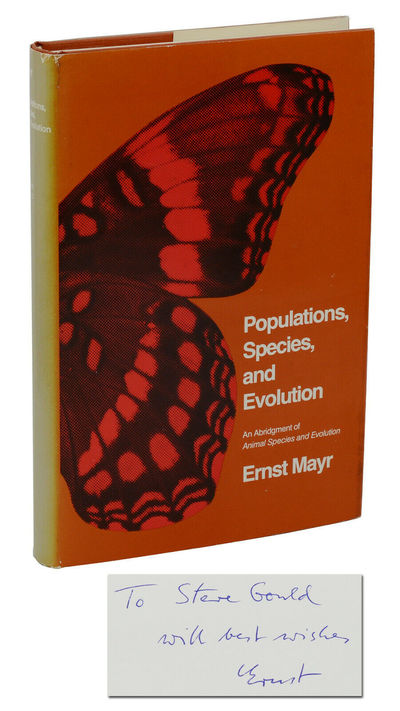 by Mayr, Ernst; [Gould, Stephen Jay]
Cambridge, MA: The Belknap Press of Harvard University Press, 1970. First Edition. Fine/Very Good+. First thus. Inscribed by Mayr to Stephen Jay Gould, "For Steve Gould with [signed] Ernst." xiv, [3], 453 pp. Original brick red cloth lettered in silver. Fine in Very Good+ dust jacket with sunned spine panel. A superb association copy linking two titans of evolutionary biology, whose lives and work were deeply intertwined. Gould was once Mayr's course assistant at Harvard; Gould would go onto teach at Harvard himself as Mayr became a professor emeritus. Most importantly, in 1972 Gould (along with Niles Eldredge) published the groundbreaking article "Punctuated equilibria: an alternative to phyletic gradualism." It introduced the concept of punctuated equilibrium that built on Mayr's earlier theories of genetic revolutions by allopatric and peripatric speciation as applied to the fossil record, overturning the previous orthodoxy that evolution was gradual and consistent. As Mayr would later write, "Whether one accepts this theory, rejects it, or greatly modifies it, there can be no doubt that it had a major impact on paleontology and evolutionary biology." It was also the vindication of Mayr's life's work. Mayr's definitive work was the 1963 book Animal Species and Evolution. This work is a revised abridgement of it for the general reader that remains in print. (Inventory #: 140938738)
$5,000.00 add to cart Available from
Burnside Rare Books
Share this item
Burnside Rare Books
Offered by

Dangling in the Tournefortia

The Desert of the Heart

Toronto : The Macmillan Company of Canada Limited , 1964
(click for more details about The Desert of the Heart)
View all from this seller>