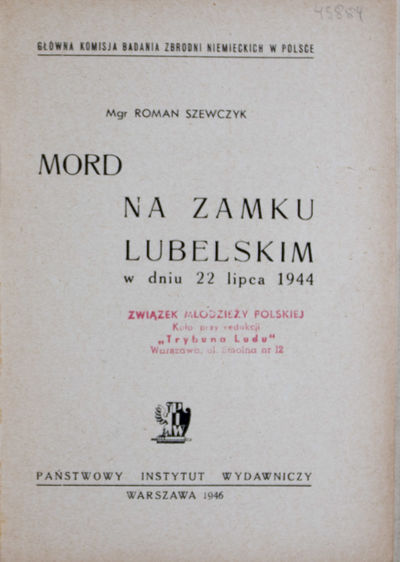 by Szewczyk, Roman; Glówna Komisja Badania Zbrodni Hitlerowskich w Polsce (Main Commission for the Investigation of Nazi Crimes in Poland)
Warsaw: Panstwowy Instytut Wydawniczy, 1946. First edition. Softcover. g+ to vg-. Octavo. 52pp. [8]. Printed tan wrappers with black lettering on the front cover. This report of the Main Commission for the Investigation of Nazi Crimes in Poland, examines in detail, the infamous massacre of more than 300 prisoners held at the Lublin Castle by the Nazis, on July 22nd, 1944. The castle which had originally been built in the 13th century, was first the residence of the High Duke Casimir II. Since the time of its reconstruction in 1828, the castle was used by the various authorities of the time as a prison. The Nazis carried on this tradition during the occupation of Poland, most infamously. After the war the Soviets used it as well, until its use as a prison ceased in 1954. During the period of the German occupation of Poland (1939-1944) it is estimated that more than 40,000 prisoners passed through Lublin Castle. In July 1944, with the approach of the Soviet army, the Germans began to "empty" the prison, with 1500 prisoners transferred to the nearby Majdanek concentration camp, where they were executed. The final prisoners (more than 300) including woman and children, were killed within the span of 2 hours by SS members, right before the complete evacuation of the Germans. It was the largest single execution of in the prison's history. Witnesses who came to the prison shortly after it had been abandoned, encountered a most gruesome and horrific scene. The publication is a detailed examination of the event and includes eyewitness accounts, and other primary source material. The final 8 unpaginated pages, contain b/w photographic reproductions of original documents, including lists of prisoners, and grisly images of the massacred prisoners. Text in Polish. Wrappers with some light sunning and water stains. Corners with light rubbing. Rubbing and chipping to the head and tail of the spine, with some damp stains along the front hinge. Interior with a closed tear on the title page, and ink stamps of the "Union of Polish Youth" on the title page, pgs.11 and 42. Age toning to pages throughout. Wrappers in good+, interior in very good- condition overall. Protected by modern mylar. (Inventory #: 45884)
$450.00 add to cart or Buy Direct from
Eric Chaim Kline Bookseller
Share this item