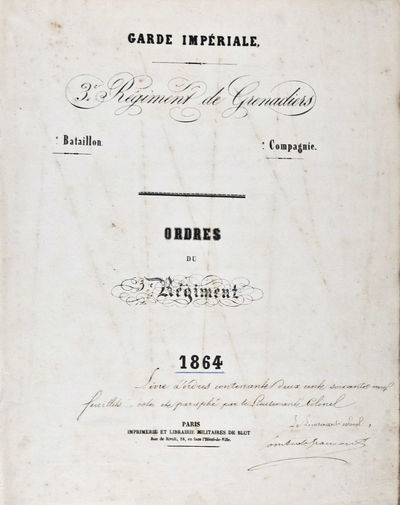 by De Ladmirault*, Paul (General); Auguste-Alexandre Ducrot* (Colonel); Metman (Colonel); Bastoul (Colonel); Lieutenant-Colonel de Gramont; Renault (Lieutenant-Colonel)
Paris: Imprimerie et Librairie Militaires de Blot, 1864. First edition. Hardcover. vg. [MANUSCRIPT] Folio. 233pp. Original half olive cloth over marbled paper covered boards with handwritten title label pasted on each board. Robert Florey*'s ex libris on inside of front cover. Printed title page inscribed and signed by Lieutenant-Colonel Comte de Gramont. The Imperial Guard of Napoleon III was a military corps in the French Army formed by Napoleon III as a re-establishment of his uncle Napoleon I's Imperial Guard, with an updated version of the original uniforms and almost the same privileges. It was formed by a decree of the emperor on 1 May 1854, and was made up of 17 regiments of cavalry, artillery and infantry, squadrons of train (supply and administration) and mounted gendarmes, and a division taken from the corps of military engineers. The emperor added a regiment of Zouaves to the Guard in 1855, selected from the three existing regiments of zouaves first raised in 1830. The '3e Régiment de Grenadiers' was created by Imperial decree in December 1855. The Guard was formally abolished by the new French Republican Government, following the fall of the Empire (1870). The 90 regulations contained in this rare manuscript document titled "Ordres du Régiment" provide a valuable insight into the military life of officers and soldiers of Napoleon III's Third Regiment of Grenadier Guards. The complete 90 handwritten regulations range from Order #1 dated August 31, 1863, to Order #90 dated December 29, 1864. Some of the topics mentioned are the following: Pistol duelling forbidden (Order #2, dated Rueil, May 28, 1856, and signed by Colonel Ducrot*); Punished soldiers (Orders #11, and 14); Military instructions; Appointments and promotions; Sword and rifle range training, etc.. The regulations are handwritten on 95 pages, each hand-numbered at upper corner. Another section titled Ordres Généraux at reverse of book has its pages pulled out and missing. Some rubbing with minor abrasion along edges of binding. Slight age-toning along paper margin. Text in French. Binding in fair to good-, interior in very good condition. * Paul de Ladmirault (Montmorillon, 17 February 1808 - Sillars, 1 February 1898) was a French general active in the French conquest of Algeria and during the wars of the Second French Empire. * Auguste-Alexandre Ducrot (24 February 1817 - 16 August 1882) was a French general. Ducrot served in Algeria, in the Italian campaign of 1859, and as a division commander in the Franco-Prussian War. At the Battle of Sedan on 1 September 1870, he succeeded to take over the commandment of the French army after Marshal Mac-Mahon was wounded. By that time, it was obvious that a disastrous defeat was inevitable. Ducrot summed up the situation with the famous remark "Nous sommes dans un pot de chambre, et nous y serons emmerdés." (We are in a chamber pot, and we're going to be shit on.) *Robert Florey (14 September 1900, Paris - 16 May 1979, Santa Monica, California) was a French-American director, screenwriter, film journalist and occasional actor. As a director Florey's most productive decades were the 1930s and 1940s, working on relatively low-budget programmers for Paramount and Warner Brothers. His reputation is balanced between his avant-garde expressionist style, most evident in his early career, and his work as a fast, reliable studio-system director called on to finished troubled projects, such as 1939's Hotel Imperial. He directed more than 50 movies. His most popular film is likely the first Marx Brothers feature The Cocoanuts of 1929, and his 1932 foray into Universal-style horror, Murders in the Rue Morgue is regarded by horror fans as highly reflective of German expressionism. In 2006, as his 1937 film Daughter of Shanghai was selected for preservation in the United States National Film Registry by the Library of Congress, Florey was called "widely acclaimed as the best director working in major studio B-films (Inventory #: 36793)
$1,250.00 add to cart or Buy Direct from
Eric Chaim Kline Bookseller
Share this item