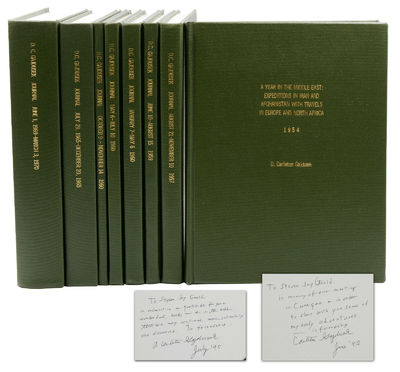 by Gajdusek, D. Carleton; [Gould, Stephen Jay]
[np]: [No Publisher], 1995. Near Fine. A presentation set with three volumes inscribed by the author in 1995 to evolutionary biologist Stephen Jay Gould, with an inscribed 8" x 11" sheet listing the volumes (apparently a fraction of the voluminous journals of the author) laid in. A Year in the Middle East is inscribed, "To Steven [sic] Jay Gould, in memory of our meeting in Curacao + in order to share with you some of my early adventures. -- in friendship [signed] Carleton Gajdusek June '95." Melanesian and Micronesia Journal is inscribed to Gould (with the correct spelling of his name), "That I might sing as you do of your joy in nature..... and friendship." Journal of the Expeditions to the Soviet Union is inscribed to Gould, "in admiration + gratitude for your wonderful books-- & in the hope that we may continue more intimately our discourse. In friendship," signed, dated 1995. A very interesting association between two prominent scientists, Gajdusek being the 1976 Nobel co-laureate in Physiology or Medicine, writing and presumably sending these volumes to Gould approximately a year before his criminal charges for child molestation. After a twelve months in jail and a plea bargain he would move to the Netherlands and Norway, where he spent the rest of his life. He is most often referenced for his work on the disease kuru, which led to the discovery of the prion. Eight various volumes in the Journals of D. Carleton Gajdusek series, all Near Fine or better condition, bound in green cloth. Titles are: 1. A Year in the Middle East: Expeditions in Iran and Afghanistan with Travels in Europe and North Africa, February 4 - December 22, 1954 2.Kuru Epidemiological Patrols from the New Guines Highlands to Papua, August 21 - November 10 1957 3.New Guinea Journal, June 10 - August 15 1959 4. Solomon Islands, New Britain and East New Guinea Journal, January 7 - May 1960 5.West New Guinea Journal, May 6 - July 10 1960 6.Journal of an Expedition in the Libyan Sahara to Kufra, October 9 - November 1960 7.Melanesian and Micronesian Journal Return Expeditions to the New Hebrides, Caroline Islands and New Guinea, July 29 - December 20, 1965 8. Journal of Expeditions to the Soviet Union, Africa, the Islands of Madagascar, La Reunion and Mauritius, Indonesia and to East and West New Guinea and Guam, June 1, 1969 - March 3, 1970. (Inventory #: 140938744)
$3,000.00 add to cart Available from
Burnside Rare Books
Share this item
Burnside Rare Books
Offered by