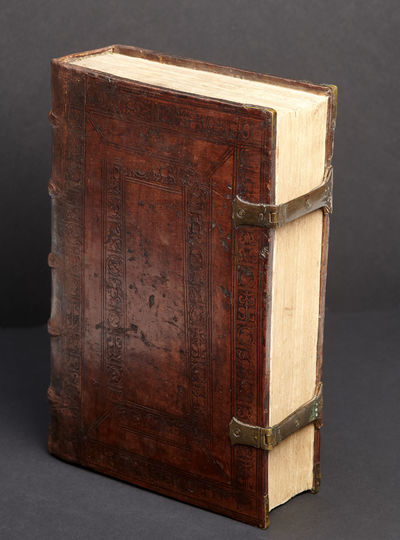 by BEDE (or BEDA), the Venerable
Numerous fine woodcut initials, diagrams, tables, & maps in the text. Woodcut printer's device at end. 14 p.l., 18 leaves, [6] leaves, 30, xxxi-cxxvi leaves, 4 leaves. Folio, cont. Flemish blindstamped calf binding over wooden boards (rather well rebacked, a few unimportant stains), rolls of medallion heads & foliage forming a double panel, orig. clasps and catches, metal corner guards. Cologne: J. Prael for P. Quentel, 1537. [bound after]: ANSELM, ARCHBISHOP OF CANTERBURY. In Omnes Pauli Apostili Epistolas enarrationes. Title within fine woodcut border by Anton Woensam of Worms. Some fine large woodcut initials. 8 p.l., 531 pp. Folio. Cologne: E. Cervicornus for G. Hittorp, 1533. A most attractive sammelband of two well-illustrated books in an attractive contemporary blind-stamped binding probably made at the Stavelot monastery in Belgium. I. First collected and illustrated edition of the scientific writings of the Venerable Bede including De Natura Rerum, dealing with cosmology and natural history, and De Temporum Ratione, a work on chronology that still exercises a considerable influence over our daily life today. This edition was edited and commented upon by Joannes Noviomagus, i.e., Jan van Bronchorst of Nijmegen (1494-1570), philosopher and mathematician, then a professor of philosophy at the Collegium Montanum in Cologne. It would appear that he used the manuscript at the Dombibliothek (no. 103) of Cologne to prepare this edition. The De Temporum Ratione is a significant book in several ways. Most notably, "this book helped to establish the custom of counting years from the birth of Christ. When we say that Queen Elizabeth II was born in 1926 (not 'in the 16th year of the reign of George V,' or 'in the year 2678 after the foundation of Rome,' or in the '2nd year of the 481st Olympiad'), we are indebted to the Venerable Bede."-Printing & the Mind of Man 16n. "Bede's greatest practical effect was on the Western calendar. His decisions (beginning the year, calculation of Easter, names of days and months, calculations of eras, and so forth) in most instances finally determined usage that was only refined, not changed by Gregorian reform."-D.S.B., I, p. 565. "The De Ratione Temporum, first published in 1505, is particularly important. It contains a remarkable theory of tides based upon Pliny, but also upon personal observation; first mention of the establishment of a port (i.e., the mean interval between the moon's meridian passage and high water following; this interval is different in different ports)."-Sarton, I, p. 511. Pierre Duhem described Bede's establishment of a port as the only original formulation of nature to be made in the West for some eight centuries. Also contained here is the De Natura Rerum (1st printing: 1529), which contains such physical science as was then known. It collects the wisdom of the ancient world on these subjects and has the special merit of referring phenomena to natural causes. It contains a particularly important section - the "De Comptu vel Loquela digitorum" - which is "our main (almost our only) source for the study of mediaeval finger reckoning or symbolism."-Sarton, I, pp. 510-11. See also Smith, History of Mathematics, II, p. 200. The rest of the book contains further treatises by Bede on arithmetic, astronomy, and the calendar and chronology. II. Very rare. PROVENANCE: Early inscription of "Antonius abbatis a Sancto Remaclo" on front flyleaf; Benedictine monastery of Stavelot (Belgium), inscription "Liber Monasterii Stabulensis" on title-page (of Anselm); auction sale of the monastery library, Catalogue d'une belle Collection de Livres et Manuscrits précieux sur vélin du VIIIe et du IXe siècle, Ghent, 26 April 1847, lot 42; Michel Chasles (1793-1880), the mathematician, with bookplate, his sale, Paris, 27 June-18 July 1881, lot 28; Robert B. Honeyman (1897-1987), his sale, Sotheby's, 30 October 1978, lot 265. BINDING: Stavelot had its own bindery at this time, and it is quite likely that this binding was executed there (see Goldschmidt, Gothic & Renaissance Bookbindings, no. 90). Fine large copies, preserved in a box. ❧ I. Adams B448-(calling for two additional preliminary leaves but no other collation calls for them). Smith, Rara Arithmetica, p. 159n. Zinner 1657. II. Adams A1174. (Inventory #: 6759)
$13,500.00 add to cart or Buy Direct from
Jonathan A. Hill, Bookseller
Share this item
Jonathan A. Hill, Bookseller, Inc.
Offered by


(click for more details about [From first page]: Books by Edward Ruscha)

[From the upper cover of the portfolio]: Ray Johnson, North American, Networkers, and Dadazines


(click for more details about [From the upper cover of the portfolio]: Ray Johnson, North American, Networkers, and Dadazines)
View all from this seller>