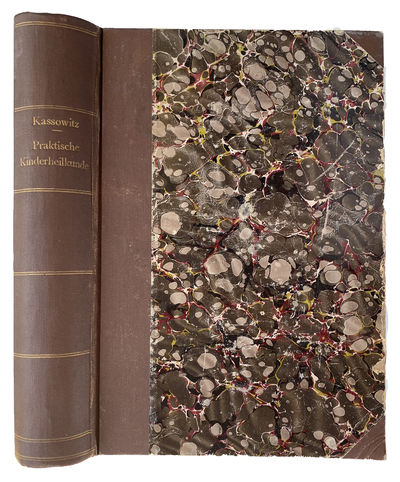 by KASSOWITZ, Max (1842-1913).
Berlin:: Julius Springer, 1910., 1910. 8vo. XII, 653, [1] pp. 44 figures (incl. 1 color plate), index. Original half brown gilt-stamped cloth, marbled paper over boards; fore-edges worn. Very good. First edition. Kassowitz dealt with the study of hereditary syphilis and the pathophysiology of rickets. To treat this, he first gave the children phosphorus in oil, and later doses of cod liver oil. He described the healing effect of his medicine in the phosphorus treatment of rickets. The fact that cod-liver oil contained vitamin D, and healing power, wasn't discovered until 1919 by Kurt Huldschinsky. / Max Kassowitz, Austrian pediatrician, was born in Bratislava, Slovakia. He took his doctorate at the University of Vienna in 1863. In 1872 Kassowitz began work at the First Public Children's Institute, Vienna, and from 1869 worked as a physician. By 1881 he was the successor to his mentor, and former director, Leopold Max Politzer. In 1891 Kassowitz was appointed University of Vienna professor of pediatrics, where he remained until his retirement in 1906. (Inventory #: M13689)
$45.00 add to cart Available from
Jeff Weber Rare Books
Share this item