The Saga of Grandma Rogers 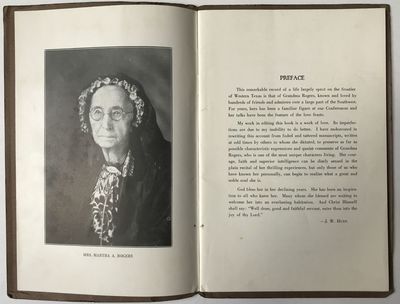 by Rogers, Martha A.
[N.p., but presumably northwestern Texas, 1922. Very good.. 55pp. Original brown wrappers, stapled. Lightly soiled, minor wear. Internally clean. An autobiographical account of the life of Martha A. Rogers, a frontier Texas wife and devout Methodist. A native of Mississippi, Grandma Rogers moved to Texas as a young girl, around 1850, and herein describes her life with a heavy emphasis on the religion of the area and its importance to her. This volume was published when she was 85 years old, and is illustrated with halftones of her and her family. Includes testimonials at the end as to Grandma's devoutness and fortitude -- we suppose it was published in a small run as either a keepsake or a fundraiser for her. Fewer than ten copies in OCLC, all but one located in Texas. A scarce and interesting account of early pioneer times by a woman who lived through them. (Inventory #: 867)
$650.00 add to cart Available from
McBride Rare Books
Share this item