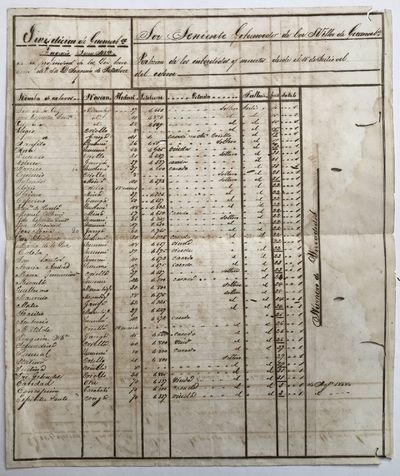 by [Cuba]. [Slavery]
[Guanabacoa, 1868. About very good.. Manuscript broadside, approximately 13.75 x 11.5 inches. Folded horizontally. A few worm holes, marginally affecting text. Light tanning and dampstaining; a bit of offsetting. A manuscript table that records incidents of cholera amongst the slaves on the plantation of Don Joaquin de Peñalver in Guanabacoa, Cuba, during the summer of 1868. The broadside lists forty-two slaves that came down with the disease in July and the beginning of August of that year, and supplies their given names, place of birth, age, height, marital status, and the date that they contracted cholera. The record does not differentiate between slaves that were invalided and those that died from the disease, but it seems unlikely that many recovered. These cases were part of a larger outbreak of cholera on the island during 1867 and 1868, that principally affected the enslaved population there and killed thousands. Peñalver was a prominent sugar farmer in the region east of Havana in the mid-19th century. A unique record of disease affecting Cuban slaves just prior to the onset of the Ten Years' War. (Inventory #: 736)
$750.00 add to cart Available from
McBride Rare Books
Share this item