SUPPLEMENT TO THE ORLEANS AMERICAN 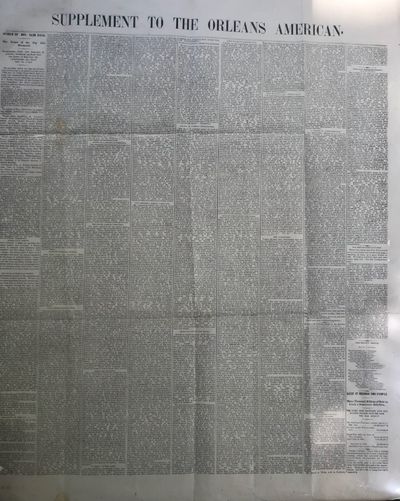 [Albion, NY, 1868. Broadside. 70 x 58 cm. Newspaper supplement, printed in nine columns, recording the speech of Hon. Noah Davis on the "Issues of the Day Ably Discussed. Reconstruction---Public Debt---Democratic Repudiation---Greenbacks and Bonds---Taxation---Expose of Democratic Misrepresentations---Gov. Church Under the Scalpel." Old fold lines, but an otherwise fresh copy. The Orleans American was a weekly newspaper published in Albion, New York, from 1832 - ca.1910. Davis, a Republican, was running for Congress to represent New York's 28th district, to replace Lewis Selye who was not running for reelection. Davis' speech addresses the negative effects of the Democratic party on the Reconstruction acts, and takes to task the Democratic nominee for President Horatio Seymour who was opposing Ulysses S. Grant in the 1868 elections. Following the text of his speech, there are a few other short articles, including "Secretary McCulloch's Reply to Mr. Delmar," "Democratic Falsehoods Exposed," "New York for Grant and Colfax," and a report on the public debt. Noah Davis (1818-1902) won his election to Congress in 1868, serving until July 1870. Pres. Grant appointed him U.S. District Attorney for the Southern New York, and he later served as a judge of the New York Supreme Court. He presided over the first and second trials of William M. "Boss" Tweed, sentencing him to 12 years for embezzlement and interfering with municipal elections. [see his biography in the DAB, Vol. V, p.140]. (Inventory #: 63948)
$750.00 add to cart or Buy Direct from
Bartleby's Books
Share this item

THE BLOOD IS THE LIFE OF THE BODY.... THE FOUR-FOLD LINIMENT INFUSES NEW LIFE TO THE DISEASED PARTS, AND REMOVES ALL DEAD HUMORS THAT OBSTRUCT THE FREE CIRCULATION OF THE BLOOD.... [caption title]

[Allegheny City, PA : R. Matchett, Proprietor , 1890
(click for more details about THE BLOOD IS THE LIFE OF THE BODY.... THE FOUR-FOLD LINIMENT INFUSES NEW LIFE TO THE DISEASED PARTS, AND REMOVES ALL DEAD HUMORS THAT OBSTRUCT THE FREE CIRCULATION OF THE BLOOD.... [caption title])