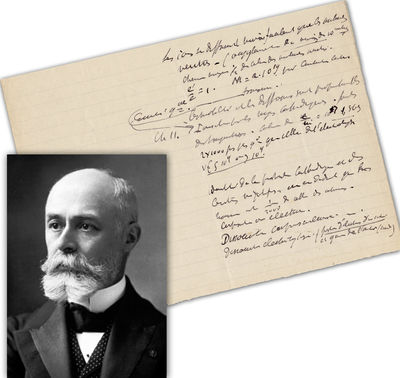 In this undated manuscript, Becquerel jots down some notes concerning x-rays, electrolysis, and ions, relating to his work on radioactivity. Becquerel's fluid handwriting suggests his impatience to record his findings. Manuscripts written by Becquerel discussing radioactivity are of great rarity. Should yield fascinating new discoveries when fully translated!

Some interesting equations and notes include:

Henri Becquerel came from a family of well-respected French physicists. After holding a few government positions, Becquerel transitioned into research and academia. His early studies focused on light absorption and deflection, phosphorescence, magnetism, and gases. In 1896, Becquerel discovered natural or spontaneous radioactivity by conducting experiments with uranium salts. Becquerel rays were later named after him; they later became known as radioactivity (a term coined by Marie Curie.) In 1903, Becquerel was awarded the Nobel Prize in Physics along with Marie and Pierre Curie.

Jacqueline Kennedy Detailed Oleg Cassini Ledger of Fabric Samples, Including Poignant Entries Before and After Assassination


(click for more details about Jacqueline Kennedy Detailed Oleg Cassini Ledger of Fabric Samples, Including Poignant Entries Before and After Assassination)


(click for more details about Captain George S. Patton Writes to His Father about the New Tank School He is Creating in France)
View all from this seller>