Bound notebook of printed poetry and other materials written by Deane 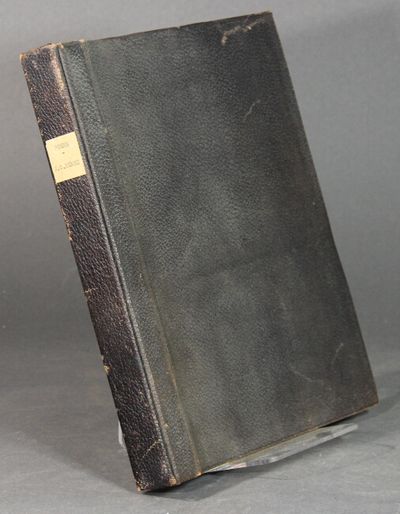 by Deane, Nathaniel Carter
n.p., n.d. but likely Carneigie, PA, 1922. Nathaniel Deane Carter was born in Massachusetts in 1844. He joined the 21st Massachusetts Infantry in 1861 prior to his seventeenth birthday. He was wounded four times in battle. He learned the techniques of first aid and helped ease the pain of the wounded after battle. He left the army in 1865 and joined the Pennsylvania Railroad as a laborer at Williamsport, Pa. He worked his way up to Terminal Manager in 1872 and moved to Carnegie, Pa. He married Kate Klett in 1872 and they had five children. He also wrote poetry after the war and had a number of them published. This looks to be Deane's own copies of most of his work, with his 3-page autograph letter of transmittal signed by him and dated September 14, 1922 to Mrs. Flora S. Chapin of Worcester, Mass, whom he addresses as "Dear Daughter of the 21st Regiment," apparently transmitting to her this notebook. This letter is prefaced by a printed poem "You and I As Boys," signed in type Nathaniel Carter Deane / Feb. 23, 1910, and with an inscription at the bottom: ":Dear Daughter of the 21st Regiment, Mrs. Flora S. Chapin / Always, Nathaniel Carter Deane." Included in the notebook is a photographic portrait of Deane (as well as several other portraits), approximately 95 printed pages of his poetry (but some prose), largely referencing his time spent in the Civil War, 2 with carbon typescript introductions; a 2-page typescript, "A Letter from My Father," signed in type Charles Pinkney Deane; a 1-page carbon typescript, both prose and poetry, "Guarding the Gang Way"; a 2-page carbon typescript, both prose and poetry, "Helias Hellis"; a 1-page prose typescript; a 1-page prose typescript "The Change of Tempriture [sic]: The 21st Passing Harve de Grass on the Morning of the 25th of August, 1861"; a 2-page prose carbon typescript "Following the Flag"; a 16-page pamphlet The Spirit of the American Red Cross: A Chapter from the Autobiography of Nathaniel Carter Deane, copyright 1918; 3-page prose and poetrty typescript, "Wanted a Man"; 1-page carbon typescript, "Among Men"; an 8-page printed tribute by Deane to "The Red Cross Nurse ... Clara Barton"; and a 4-page tribute to the 21 Massachusetts Volunteeer Infantry, "Why Comrades are Comrades." (Inventory #: 54525)
$747.50 add to cart or Buy Direct from
Rulon-Miller Books
Share this item

Final report of the proceedings of the Masonic Board of Relief of the city of Chicago, organized to distribute the funds and other aid sent from abroad for the relief of master masons, and the widows and children of deceased bretheren, who were rendered needy by the great conflagration in the city of Chicago, October 8th and 9th, A. D. 1871

Chicago : Hazlitt & Reed , 1872
(click for more details about Final report of the proceedings of the Masonic Board of Relief of the city of Chicago, organized to distribute the funds and other aid sent from abroad for the relief of master masons, and the widows and children of deceased bretheren, who were rendered needy by the great conflagration in the city of Chicago, October 8th and 9th, A. D. 1871)

Philadelphia : Styner and Cist , 1779
(click for more details about A grammar of the French tongue, grounded upon the decisions of the French Academy)
View all from this seller>