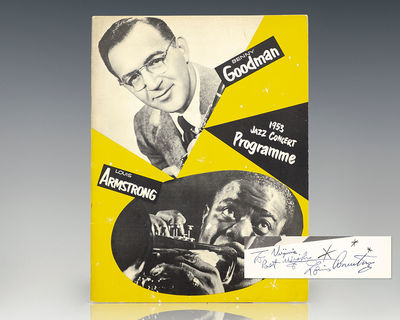 by Armstrong, Louis
New York: Columbia Records, 1953. Rare jazz concert program from a 1953 performance of the Benny Goodman Orchestra and Louis Armstrong All Stars. Folio, original pictorial wrappers, featuring full page photographs of each band member. Inscribed by Louis Armstrong below his photograph, "To Virginia, Best Wishes Louis Armstrong." Additionally signed by Barney Bigard, Velma Middleton, and Willie Smith. In near fine condition. American trumpeter, composer and vocalist Louis Armstrong was one of the most influential figures in the history of jazz. His career spanned five decades, from the 1920s to the 1960s, and he was renowned for his charismatic stage presence and voice almost as much as for his trumpet playing. Armstrong was one of the first popular African-American entertainers to "cross over"; whose skin color became secondary to his music in an America that was extremely racially divided at the time. (Inventory #: 96540)
$1,200.00 add to cart or Buy Direct from
Raptis Rare Books
Share this item