The Dramatic Works of Shakespeare (in 9 vols.) 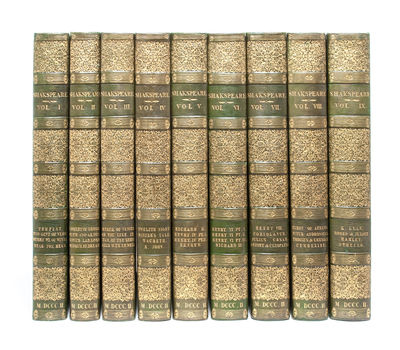 by Shakespeare, William (Revised by George Steevens)
London: Printed by W. Bulmer & Co. for John and Joshua Boydell, 1802. First edition. Fine. Folio (420 x 322mm). Contemporary green straight-grain morocco with gilt to spine and boards. Edges gilt. Brown endpapers. Occasional light offsetting and scattered foxing, but in all an extremely pleasing set internally. With 99 copperplate engravings including the frontis and two portraits in volume I after Reynolds, Northcote, Porter, Bunbury, Opie, Westall, Smirke, Stothard, Hamilton, and some of the other eminent illustrators of the period. Bookplates of Dundee jute baron and philanthropist William Ogilvy Dagliesh of Errol to front pastedowns. Among the most celebrated editions of Shakespeare, this huge undertaking put its publisher, Boydell, into bankruptcy due to the excessive cost of the production. At the Lord Mayor of London's suggestion, Parliament passed a special act allowing for a lottery which made it possible to finish the work. A truly monumental labor of devotion, all aspects of this edition are impressive. "According to the prospectus, issued in 1786, a type foundry, an ink factory, and a printing house were all specially erected for the production of this edition" (Jaggard). While Jaggard calls for 100 plates for this set, complete copies can have anywhere between 95 and 100 plates due to Boydell's inconsistent methods of assembling the volumes. 96 plates seems to be the most common plate-count. Fine. (Inventory #: 2896)
$22,500.00 add to cart or Buy Direct from
Whitmore Rare Books
Share this item